Although there are always a variety of pathogens that threaten the health of swine in the U.S., recent years have been particularly challenging.

These challenges remind us of the importance for producers to have comprehensive biosecurity plans in place to keep pathogens out, said Scott Dee, DVM, Director of Research for Pipestone Applied Research. Biosecurity protocols include everything from vaccinations to proper ventilation and air filtration systems, and shower in/shower out to truck washes.

A sometimes overlooked, but integral part of any biosecurity program is feed. Producers that don't have an eye on feed biosecurity run the risk of both domestic and foreign animal diseases being introduced and spreading through their herds.

“Over the last eight years, the body of evidence has grown that shows feed needs to be a part of the comprehensive plan of biosecurity,” Dee said.

In early 2014, PEDv appeared and spread rapidly throughout the U.S. herd. Initially, affected farms were geographically diverse, and no obvious connections tied them together. That’s when some in the industry began to investigate the role of feed as a vector for the virus. Dee and his team at Pipestone conducted studies which confirmed the presence of the virus in feed bins and demonstrated that pigs who ate feed from these bins became infected. This led to the first ground-breaking study that showed that PEDv could be transmitted through feed.

“No one had ever considered feed as a vehicle for virus pathogens to move. Maybe Salmonella, maybe mycotoxins, but not viruses,” Dee said.

A few years later, Dee led another study that explored the survivability of pathogens in feed and feed ingredients during a transoceanic journey. This study was inspired when one of Dee’s Pipestone colleagues noticed bags of feed imported from China on a farm and wondered if viruses could survive the trip from China to the U.S. Dee and his team simulated a 37-day journey from China to Des Moines, Iowa based on an actual transport route, as well as another trip from eastern Europe to Des Moines, Iowa. Regardless of the simulated journey route, it was found that many pathogens could survive and remain infective in various ingredient matrices, ASFv included.

After confirming that viruses can indeed spread through feed, Dee worked with Kemin and others in the industry to further research regarding the efficacy of feed additives with potential feed biosecurity benefits.

Dee led a study that invited feed additive companies in the U.S. to participate in an “ice block challenge,” which attempted to recreate real-world conditions in which viruses might spread through feed. This natural feeding model is novel and important — as pigs have repeated exposure to feed, and therefore pathogens in feed, that increase the risk of infection. The researchers froze concentrations of PEDv, PRRSv and Seneca A (SVA) virus (a surrogate for FMDv) into one-pound blocks of ice, each of which was dropped into a bin of feed that fed 96 pigs (overall, 2,880 weaned pigs were involved in the study). Some of the feed bins had been treated with one of 15 different mitigants, while the others had not been treated (control). The study compared the mitigated feed to the non-mitigated feed, measuring variables such as infection rate (PCR), clinical signs, mortality and average daily gain in the pigs. All but one of the mitigants showed some efficacy at preventing infection, depending on the virus tested.

One thing was clear through the study, treating feed with a mitigant will drastically lower risk. But with biosecurity goals in mind, producers need to be clear in whether they are pursuing a mitigation effect or a high efficacy, disinfection effect.

Sal CURB® from Kemin has not only been proven to maintain the Salmonella-negative status of feed and feed ingredients, but the “Ice Block Challenge” further tested its efficacy across multiple viruses.

“To me, the gold standard of mitigants is Sal CURB, because that is what we started with, and it continues to show itself against ASFv and other viruses to be the best,” Dee said. 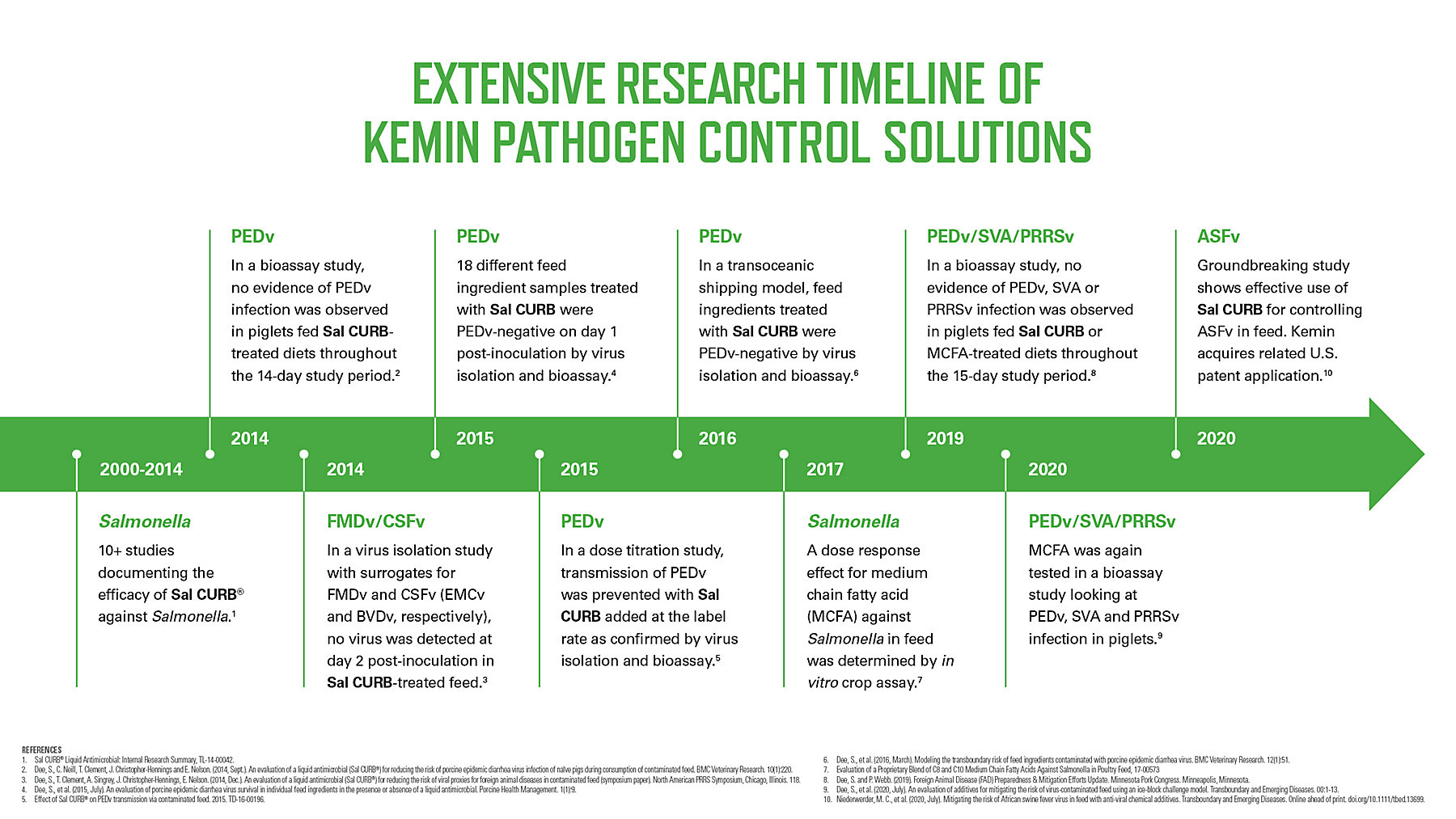 How biosecurity measures can lower risk

Some are reluctant to spend time and money on biosecurity measures, but much like insurance – it is necessary and does not have to be burdensome from a cost perspective.

“There can be a fatigue that creeps in, and people start taking shortcuts to make life easier, to save time and money,” Dee said. “When PEDv hit, everybody raised their biosecurity level; they started washing their trucks and so on. We've kind of gotten away from that, and I think we need to get back to it again. Especially now with ASFv in Haiti and the Dominican Republic — it hasn’t been this close for 40 years — we really have to be at the top of our game."

“This is likely what happened with PRRSv 144. People trying to survive the tough economic environment and the lack of a severe PRRSv outbreak in recent years may have led to more lax biosecurity among pork producers, including improper vaccination. This situation could have set up for a big outbreak like PRRSv 144,” he said.

“I call it the PRRSv clock, about every six to eight years there appears to be, for some reason, the right change at the wrong time, and you’ve got this new virus that starts running through farms and causing mortality,” Dee said. “When we haven’t had an outbreak for a while, people start forgetting what happened in the past then all the sudden we have this new virus, but it really isn’t different than we’ve seen in the past.”

While it’s true that preventing the risk of virus infections is an added cost, producers should view biosecurity measures as insurance to ward off catastrophic events, Dee said. After all, in many ways a viral outbreak on a farm is a catastrophic event for the producer and potentially their neighbors and others in their supply chain.

“I'd rather invest in insurance and sleep well at night than keep flipping a coin every day and take a chance,” he said. Implementing a comprehensive biosecurity program in the face of PRRSv 144 will also help contain the spread of other viruses, including ASFv if it appears in the U.S., he said.

As we’ve discussed, while on-farm biosecurity including ventilation, showering and washing trucks between loads of pigs are crucial, they may not be enough to keep all virus threats at bay. Unwanted pathogens can enter through feed transported from the feed mill, which can sometimes be a “hot zone” of virus transmission, Dee said. For example, feed mills may bring in products from countries at high risk for disease because they’re more cost-effective or simply not available in the U.S., he said. Once in the feed mill, viruses can spread in a variety of ways – people, surfaces, trucks and even dust.

Research shows that if trucks are not sanitized between loads of feed, they can spread viruses such as PRRSv 144 and others, Dee said. Producers who haul feed from the mill create a potential pathway for viruses to spread into even low risk, low density farms, Dee said. 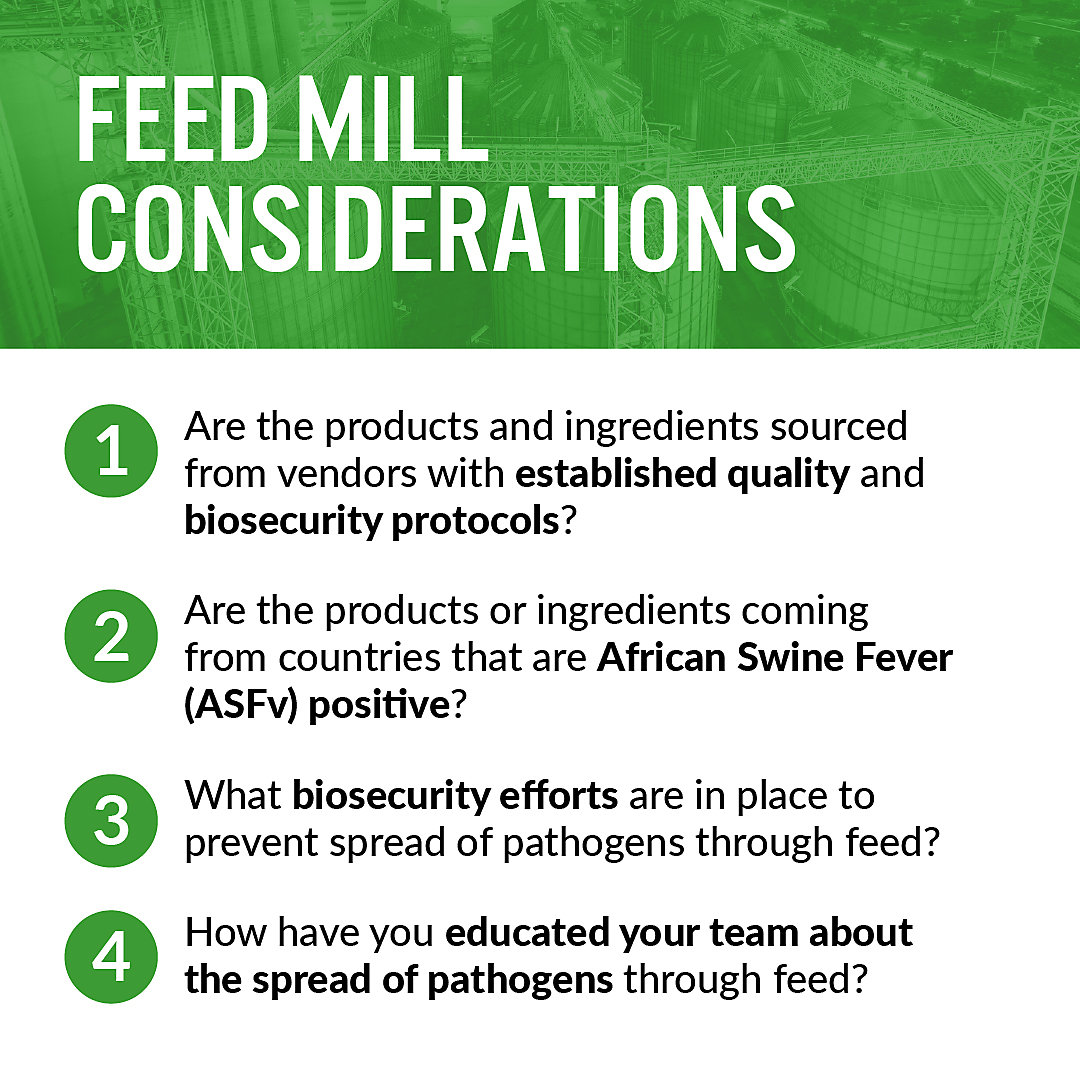 Although feed mill biosecurity is continuously improving, producers should still be cognizant of risks and choose trusted suppliers, Dee said. They should ask where the feed mill is getting its products and which biosecurity protocols it follows; they may even want to bring a veterinarian into the mill to consult on their choice, Dee said.

The evolving science of feed additives

Producers should remember that aside from the well-known biosecurity measures, they need to ensure the safety and quality of what they feed their animals. The growing knowledge of how viruses can spread through animal feed has repeatedly shown that PRRSv, ASFv, hog cholera, pseudorabies virus (PRv), FMDv, SVA, PEDv and other critical pathogens all can survive in and be transmitted through feed and feed ingredients, he said – no matter whether it came from across town or was imported from overseas.

Fortunately, there are a variety of effective feed biosecurity solutions to choose from, Dee said. While he noted Sal CURB was “the gold standard” due to its proven efficacy against a variety of viruses and extensive research portfolio, he recommends working with a veterinarian to determine what may be the best choices for a particular operation.

Learn more about the latest in emerging animal disease research and how you can safeguard your operation today.