FRESH CUT® Plus Liquid is a hay preservative for hay baled at higher moisture levels. FRESH CUT Plus is an organic acid blend effective against a wide variety of mold strains and buffered to protect equipment from corrosion. The liquid formulation allows for more complete distribution and penetration into hay.

Harvest and storage losses for baled hay can represent a significant source of economic loss. These losses are directly related to the length of time cut hay lays in the field prior to baling. Baling hay at higher moisture levels reduces leaf shatter and field curing time. Additionally, more protein-rich leaves and softer stems improve digestibility. In order to bale at moisture levels above 15 percent, forage quality solutions are required to inhibit microbial growth and deterioration of the hay during storage.

FRESH CUT Plus contains a blend of organic acids, a powerful surfactant and acids effective against mold and wild yeast growth. FRESH CUT Plus is buffered to reduce metal corrosion while improving worker safety. The liquid formulation allows for more complete distribution, dispersion and penetration into hay.

What kind of research supports the use of Kemin forage quality preservatives?

Figure 1. Impact of moisture and FRESH CUT Plus Liquid application on nutritional characteristics of baled hay

What other benefits are observed when using FRESH CUT Plus Liquid?

Can we get more hay tons per acre by using FRESH CUT Plus Liquid?

In a trial conducted in the San Joaquin Valley of California, the producer recovered more dry matter per bale when bales were treated with FRESH CUT Plus. Given the baler settings during this trial, baling at higher moisture and applying FRESH CUT Plus at recommended rates would recover approximately 19 percent more alfalfa dry matter (DM) per acre from a field. 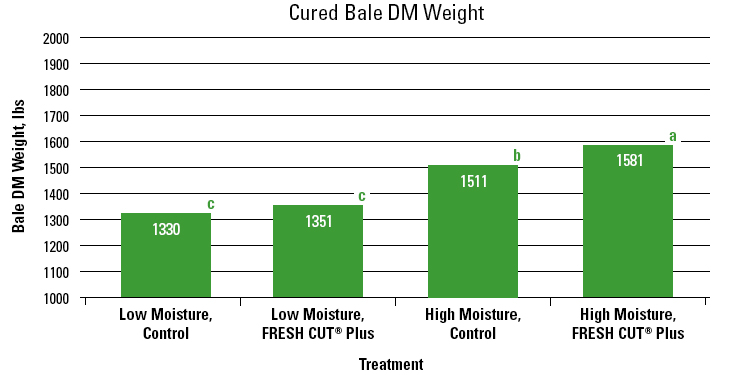 Figure 3. Effects of moisture level at baling and FRESH CUT Plus application on DM weight of cured alfalfa3

At the same time, when applied at recommended rates, FRESH CUT Plus lowered mold (P < 0.01) and wild yeast (P < 0.05) counts in cured alfalfa hay compared to the control. Blended organic acid products such as FRESH CUT Plus should be effective in reducing the growth of molds and wild yeast over time, which was supported by the trial results. 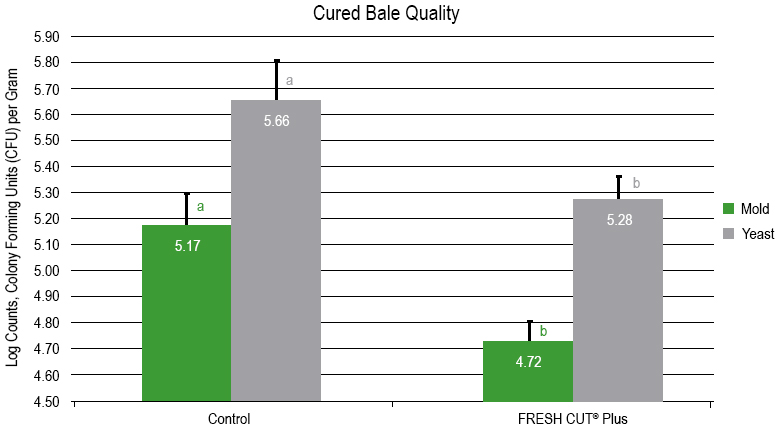 A,BMeans within the same colored bars with different superscripts are statistically different, P < 0.05.

FRESH CUT Plus application at recommended rates lowered mold (P < 0.01) and wild yeast (P < 0.05) counts in cured alfalfa hay compared to the control. Blended organic acid products such as FRESH CUT Plus are effective at reducing the growth of molds and wild yeast over time, which was supported by the trial results. 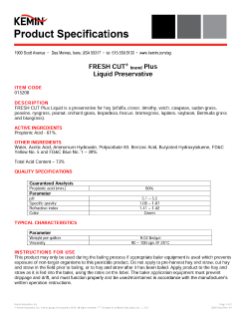