Vaccination as a Tool in Evolving Broiler Coccidiosis Control

Coccidiosis is a complex, formidable challenge for broiler producers, especially those in antibiotic-free (ABF) systems. Historically managed with anticoccidial chemical drugs and antibiotics, two industry trends — the rise in ABF production and efforts to sustain the efficacy of available ionophore and chemical anticoccidials — have a growing number of producers looking to vaccines and other products to help control the parasitic disease that’s virtually ubiquitous in many production environments.

Despite the availability of multiple anticoccidials on the market, infection with one or several species of Eimeria coccidia parasites can result in development of clinical or subclinical coccidiosis to the detriment of broiler performance. In addition, the administration of the same limited conventional anticoccidial products over long periods of time has led to decreased sensitivity among Eimeria, making subsequent generations of the parasites less susceptible to the anticoccidials designed to control them. This phenomenon has occurred despite strategic rotation of available anticoccidial products. This decreased sensitivity of coccidia parasites to chemical anticoccidials is a significant concern, especially for ABF and no-antibiotics-ever (NAE) systems in which producers can’t use ionophore anticoccidials. Adding to the challenge, these systems are increasing in number as consumer demand for ABF broilers rises.

“A strong chemical anticoccidial will be so effective that it will knock down most of the oocyst challenge in the house except those which are naturally resistant. Then the next cycle, the only oocysts left to reproduce are the resistant ones. These very strong anticoccidials are intended to be used for one cycle, then not again for a long time. Unfortunately, due to limited anticoccidial availability along with significantly improved performance, producers tended to overuse these products,” says poultry veterinarian and Kemin Technical Services Manager, Marilynn Finklin. “Then as certain ionophores became less expensive, they also tended to be overused in flock after flock. The decline in Eimeria sensitivity to ionophores was much more a gradual occurrence that took the industry longer to recognize.”

“Historically, coccidiosis vaccines were administered in a specific complexes for one to two production cycles during the summer months. Now, however, producers tend to use vaccines for at least three to four cycles or around six months of the year,” Finklin said. “Many are even using vaccines year-round for ABF and NAE production systems or because they are satisfied with broiler performance during vaccine cycles.” Wild-type vaccines, those developed from live cocci strains collected on a farm, as well as precocious vaccines, which are generated from oocysts which naturally shed early in the Eimeria life cycle, are designed to be administered just once to induce coccidiosis immunity.

Vaccinated flocks may experience a slight depression in performance during the first flock cycle, however longer-duration vaccine programs offer producers multiple benefits, including positively influencing Eimeria populations in houses and providing strong protection from coccidiosis for future flocks. According to Finklin, “The concept is that you want to change the oocyst population by reseeding the environment with the less sensitive, less pathogenic strains from the vaccine versus the less anticoccidial sensitive, more pathogenic strains that currently exist in the environment.” In many ABF and NAE systems, vaccines are administered year-round, but many conventional producers use them only in the spring and summer as a way to preserve the viability of available anticoccidial treatments. 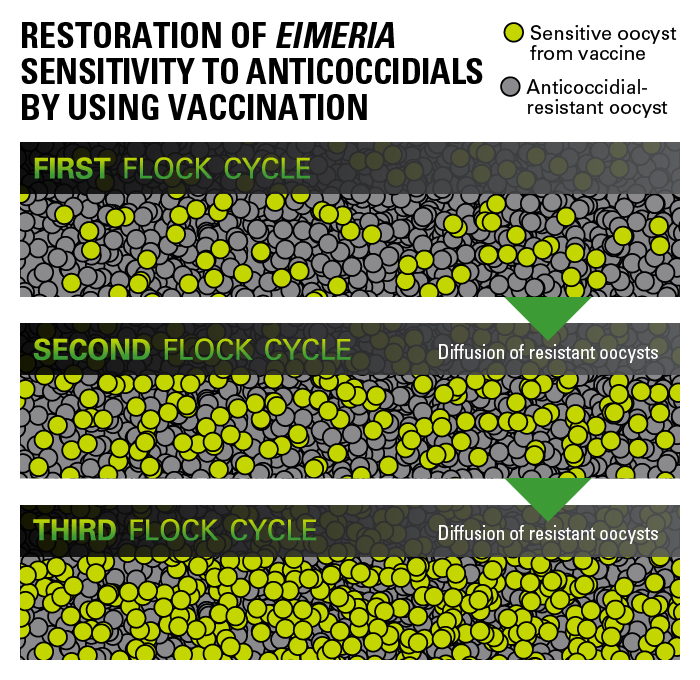 “Vaccines work great year-round because the more you use one, you tend to have fewer challenges in the house with coccidiosis. On the first cycle or grow-out, you may have some performance loss,” Finklin said. “When administering a vaccine, the peak of coccidiosis shed happens earlier than it would on a drug program. Because of that, you tend to have less carryover coccidia in the house for the next flock of birds coming in. So, flocks tend to do better with each successive cycle.”

Application in the hatchery and environmental conditions in broiler houses play a major role in the efficacy of a vaccine. Usually administered via a liquid spray or gel, the vaccine is dyed and young birds peck it from one another, then ingest it. These oocysts received in the hatchery, complete their life cycle in the birds’ intestines, then are shed back into the house environment. Further immunity is stimulated as the birds continue to ingest additional oocysts from the house environment. Temperature, lighting and water availability are all important to ensuring this natural behavior is enabled, so each bird intakes a sufficient dose both initially in the hatchery as well as receiving the self-boosted doses in the broiler house. Providing these conditions will help ensure the application is effective.

“With vaccination, brooding during the first few days of placement is a critical time. Houses have to be well lit to stimulate activity and natural bird behavior. They have to be warm and be able to see everything in order to do that. Once they get into the house, you want to make sure that feed, water, lighting, ventilation and temperature are just right, so they’re actively eating and not huddling together,” Finklin said. “The birds pick up cocci oocysts themselves by pecking in the litter. If they peck too much because of inadequate feed availability, they’ll get too much cocci. If they don’t peck enough, they won’t get that second boost of Eimeria to support immunity development. It takes two to four cycles of coccidiosis going through their intestinal systems in order to build that immunity. So, all of those environmental factors are very important.”

Given the critical role, but nuanced nature of coccidiosis vaccination programs in sustaining Eimeria sensitivity to anticoccidials and providing a way for ABF and NAE producers to provide coccidiosis prevention for their broilers, many producers have implemented a bio-shuttle coccidiosis control program. A bio-shuttle program combines the administration of a vaccine combined with feeding of anticoccidial ionophores or chemicals in the grower feed, or grower and finisher feeds. In such a prevention program, the specific timing and dosages of both depend on the efficacy of the ionophore or chemical being used in the specific operation and timing of the coccidiosis cycling. Anticoccidials should not be added to the feed too early or you risk interfering with immunity development.

The benefit of bio-shuttle programs is the ability to lower peak cycling of coccidiosis while still developing immunity. This reduction in cycling has multiple advantages including reducing risk of performance loss with vaccination and lowering your risk of secondary diseases, such as necrotic enteritis. The same benefits can be achieved using phytogenic products, such as VANNIX C4, which has anti-parasitic properties and can additionally help balance the bacterial population. Bio-shuttle programs are growing in popularity as a way to sustain the efficacy of the twelve primary anticoccidials on the market, especially given that conventional anticoccidial research has slowed immensely because of declining market demand as more producers move to ABF and NAE systems.

“Vaccines are a way to maintain the efficacy of anticoccidials in the long term. I think it’s sustainable for the time being,” Finklin said, adding that vaccines administered must target the three common Eimeria species — E. maxima, E. acervuline or E. tenella — to be fully effective. “Producers are becoming more satisfied with the performance of vaccines by themselves and have started using them as a mainstay in their coccidiosis control programs.”

Of the three primary species, E. maxima is the one most commonly referred to as a major “performance robber” in U.S. broiler facilities today. Infection can happen both clinically and sub-clinically; while the former causes symptoms like intestinal hemorrhaging, the latter is often only diagnosed via an intestinal scraping during necropsy. E. maxima is also the highest-priority species because of its increased likelihood of ushering in damaging secondary issues.

“This particular species invades a lot deeper, and it gets into the middle part of the intestine, where a good amount of nutrient absorption is going on. It takes very little E. maxima to cause you performance loss. And that’s why when we go and evaluate a farm’s coccidiosis program to see if it’s working, the E. maxima is the one we look for in conducting an intestinal scraping. You may not see it with the naked eye, but you can see it under a microscope,” Finklin said. “The E. maxima is a key Eimeria tied to intestinal damage leading to diseases like necrotic enteritis, which is another significant problem for poultry producers. By reducing E. maxima, you can manage secondary bacterial challenges that can lead to significant mortality.”

Some bio-shuttle treatment programs — those that combine anticoccidial chemicals, vaccines and other products like VANNIX C4 — often include a direct-fed microbial (DFM) as a way to ease symptoms of a potentially damaging case of coccidiosis or phytogenic ingredients – tannins, saponins, essential oils, etc. – that help promote better intestinal health. Regardless of the combination of products administered, producers should prioritize the natural cycling of any coccidiosis present in the environment.

Herein lies the benefit of VANNIX C4; the combination of phytogenic ingredients, including a novel hydrolysable tannin, and the probiotic Bacillus subtilis, PB6 helps ease the impact of any enteric challenges created by coccidiosis in a bird’s system, while helping sustain the normal cycling timeframe for whatever cocci are present. Such a combination of phytogenics and probiotics yields strong protection from secondary infections like necrotic enteritis, making it a natural, effective addition to any coccidiosis vaccination or coccidiosis bio-shuttle treatment program.

“You want to attack the coccidiosis part of it, because that’s partly why we get necrotic enteritis. We know it helps with coccidiosis directly. The thing on top of that that makes VANNIX C4 different from most competitors is that others just have a phytogenic, such as an essential oil, that’s going to help with the coccidiosis. But VANNIX C4 also has the PB6 probiotic in it, and that will help control Clostridium perfringens, the bacteria that causes necrotic enteritis. You wind up with a multi-faceted approach to controlling necrotic enteritis,” Finklin said. “There are pros and cons to vaccination: It helps improve birds’ immunity to disease and sustains efficacy of anticoccidials for coccidiosis. But, one con is the continued likelihood of bacterial enteritis. That’s where VANNIX C4 helps. It can help vaccines work without impacting how coccidiosis cycles. And, you’re adding a helpful probiotic.”

Given the benefits of VANNIX C4 as an addition to any coccidiosis control program for broilers, the product can provide producers added confidence of the overall efficacy of a vaccine-based prevention program for both the parasitic disease and costly secondary infections. In addition to providing essential compounds that complement the bird’s ability to stave off coccidiosis damage, it also delivers consistency in coccidiosis cycling, enabling other products — anticoccidials or vaccines — to continue to function optimally.