Phytogenics Augment Efficacy of other Treatments in Conventional and ABF systems.

Turkey production is a critical component of the overall consumer food supply chain. Ensuring the efficient production of healthy birds — and the continued viability of turkey producers around the world — depends on prudent farm-level management, including minimizing gastrointestinal (GI) challenges to maximize productivity and feed efficiency.

Coccidiosis is one of the most common contributors to gut health challenges that can rapidly become costly to producers in the form of declining feed efficiency and body weight or, in extreme cases, high mortality. The coccidia protozoan parasites that cause infections in challenged birds and open the door for other gut health challenges in turkeys — are virtually omnipresent in most farm environments. But, the good news is that with the right management of gut health and specific attention to management of gut microbiota and immunity, birds can stay healthy and productive, sustaining revenue potential for farmers and others in the turkey supply chain.

"When we talk about the intestinal barrier, we're talking about maintaining that barrier and keeping it intact, so we don't have any microbes or toxins getting into the bloodstream. When thinking about the microbe, we want to have a balance the good and the bad bacteria. You want the immune system to react in a controlled manner — just to take care of any challenges the animal may face, but not to produce a massive over-response. You want to have it stable," Pollock said. "When we think about gut health, we don't want one of these three components unbalanced, because that will create a bigger problem. You want to have the three of them balanced. If the immune system reacts in an uncontrolled way, for example, you're going to be diverting nutrients from meat production to the immune system." 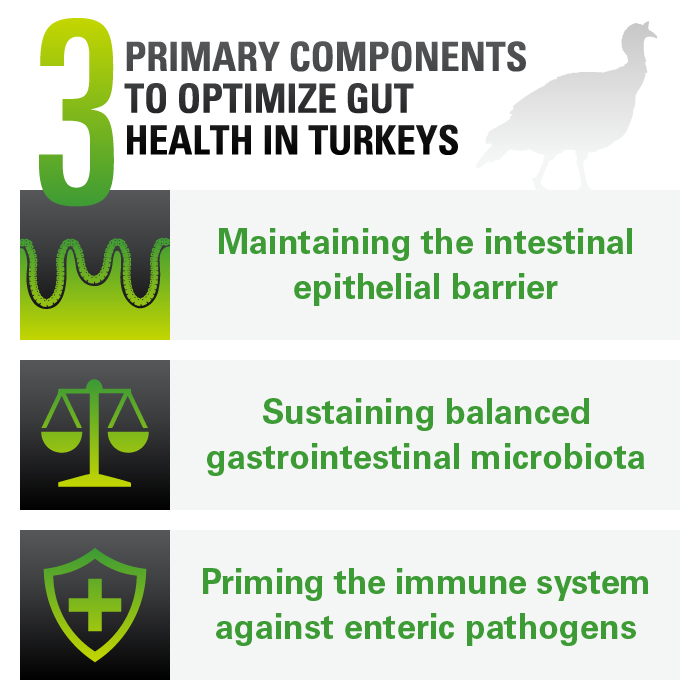 Comprehensive management of diseases like coccidiosis calls for a different strategy when producing turkeys in an antibiotic-free (ABF) system that limits or prohibits the administration of antibiotics. Turkeys normally ingest the parasites through bedding, making elimination in litter unlikely. "Coccidia are really hard to get rid of 100%. The eggs have a very thick wall, and they can survive for years in the environment," Pollock said. Further, because coccidia management tools are limited in turkey production, ABF turkey systems are faced with even greater challenges to minimizing risk of infection without a phytogenic like VANNIX C4.

"The problem with turkeys in either conventional or ABF production is that there are limited therapeutic treatment options are available. Infected poults will fail to gain weight and suffer intestinal damage, and there are even fewer tools for ABF birds. They can use a chemical coccidiostat or a vaccine, some of which can be produced for a specific farm," Pollock said. "Conventional farms can use ionophores and chemical coccidiostats — which protect birds from coccidia as well as support growth. Unfortunately, ionophore coccidiostats are considered an antibiotic and as such cannot be used in ABF birds. The problem is that in some cases, a chemical coccidiostat doesn't always provide 100% protection. That's when an alternative route like VANNIX C4 comes in handy in providing birds a boost, whether they're conventional or ABF."

Turkeys ingest coccidia parasites primarily from pecking at bedding materials. The number of oocysts, taken in contributes to the severity of infection or developed immunity. Susceptibility is highest early on in life, facilitating treatment with a vaccine or coccidiostat up until about seven to eight weeks of age is critical, Pollock said.  In ABF production live or autogenous vaccination, chemical coccidiostat and/or feed additive treatment — including with a phytogenic, organic acid, or probiotic— is typically the only viable way to control intestinal damage from the disease once birds are infected; cleaning facilities is critical to knock down oocyst populations when barns are vacant, but this is difficult given oocysts are tough to kill with common disinfectants.

“Turkeys will pick up the oocysts from the feces in the bedding,” Pollock said. “Between day 0 and day 60, we want to have a coccidiostat or a vaccine. After that, they stop being susceptible. We grow turkeys for 20 weeks, so we don’t treat them for that long when we use a phytogenic. Usually, with VANNIX C4, we recommend it from day 0 to day 49 or 60.”

Coccidiosis parasites endanger turkey gut health by penetrating and replicating in GI epithelial tissue, where one of five Eimeria — E. meleagrimitis, E. adenoids, E. caecae, E. gallopavonis and E. meleagridis — can inflict further epithelial damage in different GI tract areas. The parasites are also dangerous as pre-disposing factors for other diseases; coccidiosis can open the door to Clostridium spp. infections and may result in necrotic enteritis.

“Clostridium can reproduce, become more active and cause secondary bacterial infections. Coccidia in the animal can lead to a Clostridium infection, so you end up having two problems instead of just one. In severe cases, those clostridia can get into the bloodstream and lead to systemic internal damage,” Pollock said.

Coccidiosis has a number of symptoms relating to performance and appearance. Feed efficiency declines sharply because of the GI inflammation and lesion formation the disease causes. On the more severe end of the spectrum, the parasite can cause abrupt high mortality. It is important to note that the Eimeria that affect turkeys are different than the one that affects broilers, therefore the intestinal damage between the two species is somewhat different.

“First and foremost, the birds lose body weight, and feed conversion rates suffer. When you look at birds, you will have dull, hunched birds with ruffled feathers. You can tell they’re feeling sick,” Pollock said. “You can have sudden death, too. Diarrhea that is also watery and can contain mucous. One interesting thing here is that blood in the diarrhea is rare compared to chicken coccidiosis. There are one or two Eimeria that can cause bloody diarrhea in broilers but that’s not something seen in turkeys.”

These symptoms — especially losses in feed efficiency — add up to considerable economic losses for producers, getting a return in your investment in VANNIX C4 at the farm level by improving feed efficiency, Pollock added.

“If you look at higher feed conversion, the animal needs to eat more to produce the same amount of meat. So cost of feed is increased,” she said. “We know that the price of VANNIX C4 is competitive, and it’s easy to see the return on investment, especially if you’re talking about ABF birds where the tools are limited.

As a phytogenic and probiotic combination, VANNIX C4 serves as a multi-mode of action feed additive to help minimize the impact of enteric challenges as well as reduce the opportunity for secondary bacterial challenges. Its tannic acid extract (TAE) – a unique hydrolysable tannin – has been shown to inhibit the growth of coccidia parasites and improve intestinal integrity. In addition to TAE, oregano essential oil and yucca extract boost the antioxidant and antimicrobial activities of VANNIX C4. Inclusion of the probiotic B. subtilis PB6, also enhances a turkey’s ability to address microbial challenges and, in conventional systems, complements the efficacy of antibiotics in minimizing the effects of the other diseases coccidiosis may usher into a bird, like clostridia, that can lead to necrotic enteritis.

“Its dual modes of action are the beauty of VANNIX C4. Tannic acid extract is effective on the coccidia, and Bacillus subtilis PB6 probiotic is effective on clostridia that causes necrotic enteritis,” Pollock said. “You may have customers with coccidia problems and others with necrotic enteritis problems, then there are customers who have both. With the one-two punch of VANNIX C4, you’re protecting the animal from both diseases and supporting its immune system.”

Whether it’s used in a conventional or ABF system, it is critical to manage the tools available for coccidiosis management. Overuse of ionophores or chemical coccidiostats in conventional systems can result in development of resistance, so producers often rotate between products to maintain their long-term efficacy. In an ABF system, it’s even more important to “rest” the treatment to maintain the primary ABF treatment option, a chemical coccidiostats.

“The problem in ABF turkeys is that they cannot use a chemical coccidiostat for too long. In other words, producers need to rest it. They don’t have many options, so they can’t go on it all the time. They have the commercial vaccine that covers two strains of coccidia, and like any other coccidia vaccine may cause a secondary challenge. Some integrators use an autogenous vaccine,” Pollock said. Because of the limited options available, turkey producers actively look at potential alternative coccidiosis management strategies, including use of phytogenics. Whenever phytogenics are used, it’s critical to optimize dosing, as too much may be detrimental to the animal.

For turkey producers, a major challenge in coccidiosis management is a lack of turkey-specific data for alternative ingredients, like phytogenics. “The “right” dose of a phytogenic based on research in broilers may or may not be the most effective inclusion rate for turkeys,” Pollock said. “That’s why we’ve invested in research to determine the most efficacious level of VANNIX C4 for broilers as well as for turkeys.1 What’s exciting is that our research suggests VANNIX C4 may have multiple applications to help poultry maintain performance. It can be used to help manage field coccidia challenges1 or in combination with coccidiosis vaccination programs to improve performance without impacting oocyst cycling.”2

“For turkey producers, having new tools available to rotate into their coccidiosis management programs is critical to sustaining the efficacy of current chemical coccidiostats. With its dual mode of action, VANNIX C4 can help reduce the impact of multiple enteric challenges to support poultry performance. That means with VANNIX C4 we’re covering more ground than what is currently covered with the limited tools for cocci control in turkeys.”