The Dangers of Lipid Oxidation in Feed

Keep your animals performing their best with these tips for properly storing and stabilizing energy-rich fats and oils.

Consistent, high quality fats and oils – or lipids – are key components of a balanced, palatable beef, dairy, swine or poultry feed ration. A balanced ration typically has 3-5% fat to provide animals the right amount of energy needed for optimal growth performance during normal or stressful periods. The problem is, without adequate attention to how a fat source is stored and managed, a supplemental lipid can do more harm than good to animals’ health and performance – especially as it relates to gut health.

Common lipid sources used in feed formulations today include rendered animal fats, vegetable oils, blended fats and by-product oils. These lipids are among the most energy-dense nutrients in a balanced feed ration. Importantly, however, these lipids vary significantly not only in their nutritional value but also in their susceptibility to oxidation – a major source of reduced fat and oil quality. If you’re feeding a ration that includes an oxidized fat source, your animals likely aren’t performing at full potential, and it’s probably having a negative impact on your profits.

“Oxidation is a process that occurs at carbon-carbon double bonds in fats and oils. As oxidation occurs, toxic molecules – free radicals, peroxides, etc. – are formed which lead to fatty acid destruction, reduction in the energy value of lipids and when consumed, can further lead to oxidative stress in the animal,” said Kemin Associate Product Manager Rachel Tonda. “But oxidation isn’t limited to fats and oils, ingredients like flaxseed or rice bran as well as fat-soluble vitamins, like Vitamins A, E and K, are also susceptible to oxidation. Vitamin degradation or loss in ingredient quality caused by oxidation can cause lower overall nutritional quality of the diet.”

Once oxidation in a supplemental fat source begins, it’s irreversible, making it crucial to monitor and manage fat quality which is essential for optimizing overall feed quality, palatability and livestock performance. Fortunately for producers, adding an antioxidant can sustain lipid quality in stored fats and oils, improve vitamin retention in premixes and feed and prevent oxidation along with the damage it can cause to animal health and productivity. 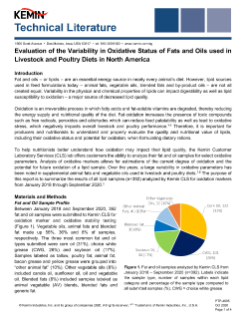 Oxidation of lipids has two important consequences. Firstly, as lipids oxidize, toxic compounds like peroxides and free radicals build up, and aldehyde and ketone levels rise, which directly contribute to dietary energy loss, decreased feed palatability and, in turn, less feed intake. Secondly, feeding oxidized lipids can lead to oxidative stress in the animal — leaving them susceptible to stressors like mycotoxins, inflammation, pathogens and more as well as lead to declining productivity.

“Elevated levels of toxic free radicals in the animal can result in oxidative stress which leads to inflammation. And when that inflammation propagates, it can cause other associated ailments affecting the health of the animal, in addition to decreasing feed intake and harming overall growth performance," said Kemin Technical Services Manager Venkatesh Mani. "Everything is interconnected. Free radicals are natural and normally inactivated very quickly by the antioxidant defense system of the body until in the presence of additional stressors, like what happens when feeding oxidized fat."

In the long term, stress caused by feeding oxidized fat opens the door widely to an animal’s natural antioxidant defense mechanisms — those that would ordinarily prevent internal damage — becoming overwhelmed, making the animals vulnerable to other diseases. This ultimately endangers a herd or flock’s overall productivity and profitability by limiting animals’ performance potential and slowly increasing the damage to overall health, beginning in the gut. Fortunately for producers, a simple, inexpensive way to address oxidation concerns is through addition of an antioxidant to stored lipids. Antioxidants quench free radicals in stored fats and oils, thereby preventing oxidation along with the damage it can cause to animal health and productivity.

How storage complicates the oxidation issue

While there’s a definite physiological link between fat oxidation and declining animal performance and overall health, there’s also a major management component of the equation. Every farm operation is different and depending on the rate of feed production and logistics of maintaining adequate suppliers, some fats may have to be stored for a time period ranging from days, weeks, to sometimes even months.

If fat is delivered and exhausted in a period of days, like in many large poultry operations, there’s less potential for oxidation and resulting development of toxic peroxides and free radicals in the stored fat source. But if that period extends to weeks or months, toxic oxidation products can rise in number and severity, thereby reducing fat quality.  Further, addition of new fat on top of old fat can promote oxidation, so if those tanks aren’t cleaned regularly, or temperature fluctuates widely, those toxic molecules can build up to damaging levels, which will act as a strong trigger for oxidation in future fats stored in the tank.

Variability in fat source quality can also be a potential source of oxidation. It’s normal for certain operations to have multiple suppliers, and quality control can be difficult to maintain.

“It’s the nature of the beast to have multiple suppliers of fat,” said Kemin Laboratory Manager Arlene Lamptey. “In general, depending on the size of an operation and general availability, a producer might have three or four corn oil or choice white grease suppliers, and the fats or oils often get co-mingled. One thing we always recommend our customers do is to pick good, consistent suppliers and stick with them. Working with a single limited number of trusted providers raises the likelihood that the product will be more consistent, but you will still see some variability. It really depends on the controls in place where the fats or oils are manufactured.” 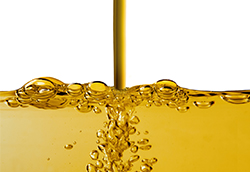 Do You Know What's Happening in Your Fat Tank?

Many suppliers provide certificates of analysis for a fat source. They may include attributes like free fatty acid percentage, moisture, insolubles, unsaponifiables and other characteristics that relate to fat quality and digestibility. Unfortunately, these variables have little to do with oxidation potential. While peroxide values are often reported, peroxides alone are insufficient to know where a fat or oil is in the oxidative process. An increased understanding of fat quality, specifically the process of oxidation and oxidation markers, can help a producer determine their need for a supplemental antioxidant.

“Oxidation is a process, so customers need to know whether it’s just beginning or is already in advanced stages. When thinking about oxidation risks, we always urge our customers to ask the question: is the quality of the fat coming out of the storage tank equal to the quality when it went in?,” Tonda said. “Adding high-quality fats or oils to a storage tank containing residual lower-quality fat can dramatically reduce lipid quality and metabolizable energy within days. By looking at multiple measures for oxidation — peroxide levels, secondary oxidatives, like aldehydes and ketones, that form after peroxides — we can determine what phase it’s in i.e., to what extent  oxidation has already happened and also get a feel for future oxidation potential." 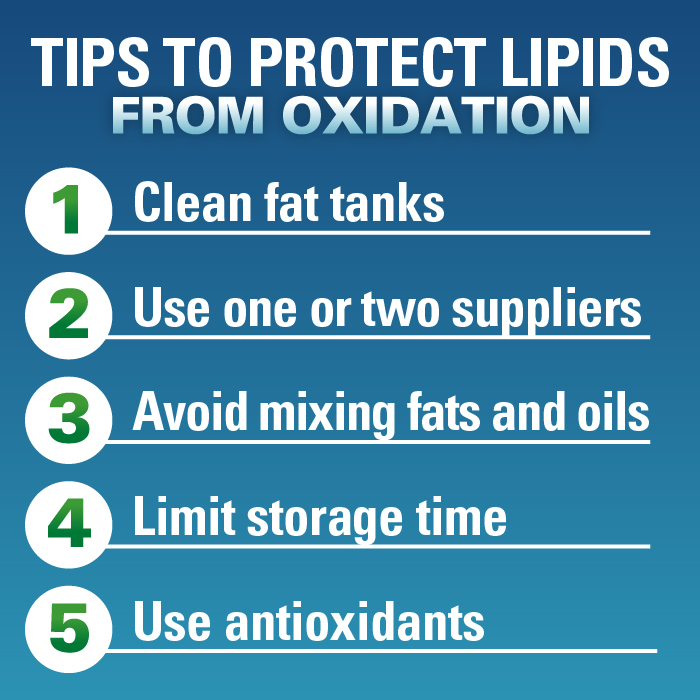 “Antioxidants have been in the livestock marketplace for decades, but with the increased knowledge about oxidative stress and its impact on animal health, the last 10 years have seen a rise in attention to antioxidants among nutritionists and producers,” Lamptey said. “Research in that time has shown more about the impact of fat quality on animal productivity, but liquid antioxidant products haven’t historically been an easy sell to producers who cycle through fat supplies frequently.”

“Some customers will say, ‘I get a load of fat every day. It doesn’t have time to get rancid,’” Lamptey said. “You can talk about the dangers in adding good fat on top of bad fat from now to next week, but without the right intervention, oxidation is going to happen. Even if the customer is going through one load of fat every day, the time spent transporting fat to the feed mill and the time it takes for feed manufactured using that fat to be consumed by the animal needs to be considered. Increasingly, antioxidants are becoming viewed as an inexpensive way to address quality control and risk management.”

A critical first step in managing oxidation is cleaning fat tanks to ensure they’re free of residual fats that could cause oxidation in any future deliveries. Starting with a clean slate, a producer or nutritionist can add a high-quality fat source and an antioxidant to prevent oxidation and limit the harmful effects it can cause. While adding an antioxidant is a key part of that equation, it’s just as important to ensure you use an antioxidant that matches the lipid source being used. Antioxidants can vary widely in cost as well as efficacy. Synthetic antioxidants like ethoxyquin (EQ), butylated hydroxytoluene (BHT), butylated hydroxyanisole (BHA) or tert-Butylhydroquinone (TBHQ) are frequently used in traditional livestock and poultry diets; whereas, natural antioxidants are more commonly used in organic systems.

“Within our RENDOX® liquid synthetic antioxidant portfolio, we offer antioxidant formulations that are designed specifically for different fat types. For the best efficacy, matching the antioxidant molecule to the fatty acid profile of the lipid you’re using is key. For example, animal fats contain more saturated fatty acids, so an antioxidant, like BHA, BHT or EQ, will best protect those fatty acids. In contrast, vegetable oils like corn, soybean and canola have more polyunsaturated fatty acids, so an antioxidant like TBHQ is going to be more effective,” Tonda said. “While synthetic and natural antioxidants are both efficacious options for oxidation control, the biggest differences between them tend to be price – natural are more expensive – and dosage. Synthetic antioxidants tend to be more effective at lower inclusion rates than natural antioxidants.”

For most fat sources, inclusion of only one to two pounds of synthetic antioxidant per ton of fat is typically sufficient to provide the necessary antioxidant quantity needed to limit oxidation effects in stored lipids. However, the condition of the fat tank and quality of the incoming fat or oil can influence how quickly an antioxidant will be sacrificed.

Another aspect a producer should consider is the desired storage time of their finished feed. “Feed for production animals is typically consumed within days to a week or two of production, whereas a bag of retail feed might sit on a store shelf for six months before it’s purchased. The consumer expects good quality whether the feed has a shelf life of 1 month or 6 months,” said Lamptey. “This adds a challenge for producers making bagged feed. Whether or not you can achieve the desired shelf life is going to be the question for the consumer versus the feed mill operator or nutritionist for production animals.”

Irrespective of the source or type, all lipids go through oxidation because of their chemical nature. Producers have the ability to influence the rate at which oxidation happens by taking some preventive measures. Antioxidants offer one such inexpensive measure to support performance of healthy animals.  If you’ve got oxidation concerns in your operation, start by discussing your lipid source with your feed supplier or nutritionist. Once you’ve confirmed your lipid source and identified the optimal product, learn more about RENDOX and the full line of Kemin antioxidant solutions.