Mycotoxins are a perennial challenge for livestock and poultry production systems given their often-undetected presence in a vast majority of feeds. Recent data indicate that around 90% of feed grain samples tested show some mycotoxin contamination, while at least 1 of the 5 most prevalent mycotoxins — T-2 toxin, deoxynivalenol (DON), fumonisin, zearalenone and aflatoxin — was present in 75% of samples. More importantly, more than half of samples contained multiple mycotoxins. To date, the interaction of mycotoxins has not been an active research area because of the vastness and expense associated with the research needs. The additive, synergistic and antagonistic interactions of mycotoxins — while still being researched — can certainly multiply overall adverse health effects, leading to costly production losses. Worse yet, even at low levels, and alone or in combination, consumption of mycotoxin-contaminated feeds has the potential to cause intestinal inflammation and oxidative stress, thereby decreasing animal health and production.

The good news? This doesn't mean you cannot be prepared in advance to limit the acute and chronic damage mycotoxins can cause when your herd or flock consumes contaminated feed. A holistic approach to managing the challenge can help maintain animal health and productivity even in the face of multiple potentially damaging mycotoxins.

Molds present in feed grains produce mycotoxins as a response to environmental stress. When an animal consumes contaminated grain, the gastrointestinal (GI) tract is the first target of harmful mycotoxins. Exposure of the intestinal barrier to mycotoxins can cause inflammation — and later oxidative stress — which, if it results in breach of the epithelial barrier, can lead to systemic harmful effects. For animals experiencing leaky gut, or the breaking down of epithelial tight junctions typically caused by stress, the risk of systemic harmful mycotoxin effects significantly increases.

The gut plays a major role in overall immune function

The immune system — 70% of which resides in the GI tract — is the first line of defense against invading pathogens and toxins. In healthy animals, innate immune cells present along the GI tract alert the host to the mycotoxin risk, resulting in immune system activation to address the mycotoxin threat. But when epithelial tight junctions break down — which can be caused by an array of microbial, social, environmental and physiological stressors — leaky gut ensues, and mycotoxins can move through the GI barrier and into the bloodstream, leading to systemic issues. 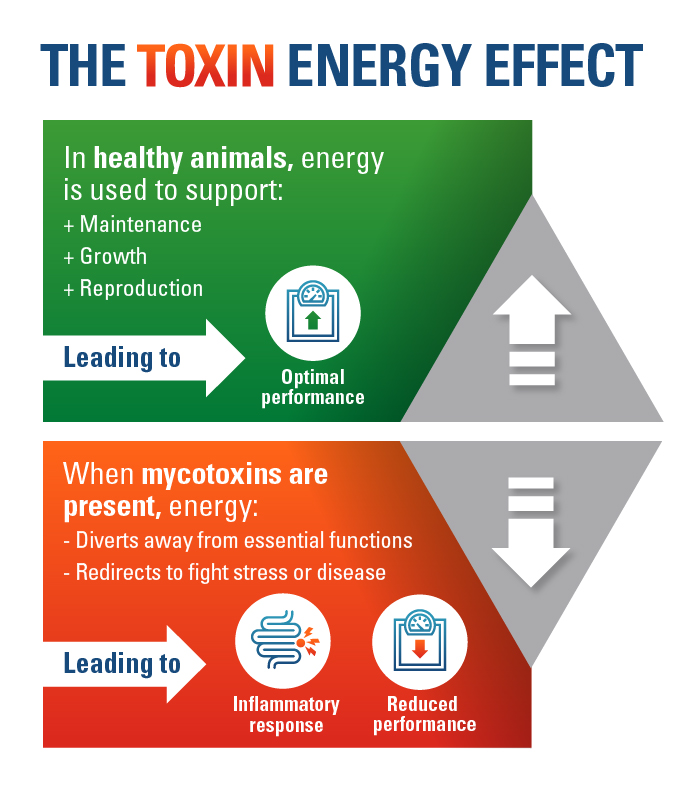 When the immune system is challenged by the presence of toxins, energy and nutrients are diverted away from essential functions such as growth, performance, reproduction and maintenance to fight off the challenge. As this happens, toxins have the potential to cause intestinal damage from inflammatory response, which then impairs whole body immunity. This impairment can cause additional issues such as increased susceptibility to infection or disease and reduced vaccine efficacy.

“When we talk about the immune system, the presence of mycotoxins messes up the whole system,” said Kemin Technical Services Manager Venkatesh Mani. “The entire immune system is impaired; it just doesn’t function when and where it is needed.”

Beyond that initial immune impairment, mycotoxin infiltration leads to oxidative stress, or an internal imbalance between free radicals – or reactive oxygen species (ROS) – and the animal’s natural antioxidant response to help manage internal oxidative stress. Excessive ROS resulting from inflammation can damage proteins and lipids that supply energy for tissue development and are needed to support animal growth. When left unchecked, ROS can even damage DNA.

Oxidative stress and the cost of time to recover

“Typically, antioxidant enzymes like catalase, superoxide dismutase and glutathione peroxidase help manage free radicals in the animal. But in the case of excess inflammation or too many ROS, those enzymes will be compromised, and ROS can damage proteins and lipids,” said Kemin Product Manager Rachel Tonda. Chronic exposure to inflammatory molecules, such as caused by the constant presence of mycotoxins in the feed, results in depletion of these antioxidant enzyme resources. “Oxidative stress is the downstream effect of multiple stressors that livestock and poultry will face — environmental stressors like heat stress and pathogens in the gut, or in this case, mycotoxins. Together, these stressors will all eventually lead to oxidative stress which can result in intestinal cell apoptosis, or cell death.”

The process of repairing and regenerating intestinal epithelial cells can take up to seven days, robbing the producer of herd or flock productivity, whether in meat, eggs, dairy or reproductive animals. That means seven days when the animal is not performing to its full potential and seven days where the producer is not achieving optimal efficiency.

“Because oxidative stress takes energy away from the animal and causes cells to die, the loss is two-fold. The energy is taken away and the intestinal cells aren’t able to absorb key dietary nutrients,” Mani said. “There is a direct correlation between how much damage the intestine sustains and how much production decreases. The more damage, the fewer nutrients are absorbed, and the worse production performance gets.”

The cycle of mycotoxin contamination and short- and long-term damage ranging from leaky gut and inflammation to oxidative stress that ultimately causes productivity to decline over time is not an insurmountable challenge. A holistic approach with attention to three specific areas helps boost animals’ innate abilities to better prevent the adverse effects of consuming mycotoxin-contaminated feed: 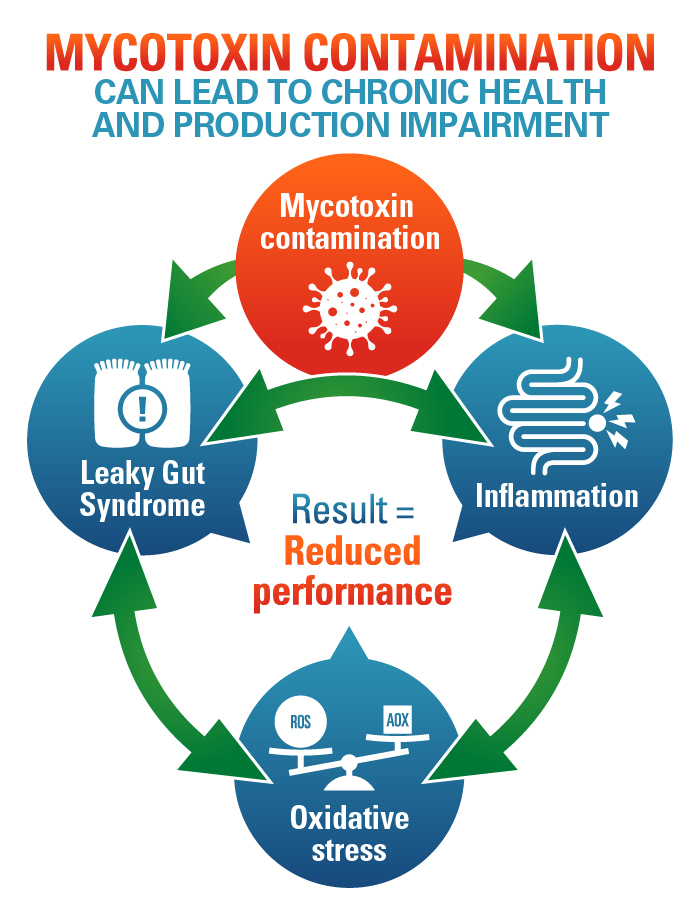 Mycotoxins are virtually ubiquitous in livestock and poultry feed. Left unattended, they can cause inflammation and later oxidative stress, especially in animals already experiencing other stressors. Knocking out mold and mycotoxins in feed and boosting animals’ natural abilities to prevent their damage can help prevent short- and long-term health complications and economic losses for producers. More importantly, both mold and mycotoxin mitigation don’t require complicated and expensive mitigation strategies. Explore more reasons to stay on top of mycotoxins this year in your livestock and poultry feed.