Exploring the Impact of Stress on Livability

Animal efficiency is a metric that all livestock and poultry production systems monitor and tightly regulate because it has a dramatic impact on a system’s profitability. How animal efficiency is evaluated – or costs attributed to it – is dependent on various factors, whether it be feed, animal health or management protocols. One such factor is livability.

In poultry integration, pullet and broiler livability can have a huge impact on how an integrator manages the number of pullets placed or number of eggs set, respectively, in order to meet the needs of their customers (e.g. pounds of meat out of the plant). Pullet livability can have an impact on the overall cost of production, in that if disease or management is not able to maintain livability, producers would take on additional costs, such as buying eggs or replacing pullets that have been lost. The same can be said for broiler livability, whether it be early or late mortality, with the latter being more costly due to the addition of feed cost. Ultimately, additional eggs would also need to be set in order to compensate for the decrease in broiler livability and still fulfill customer orders.

The high level of production efficiency today is the result of improved feeding, management and breeding practices. Several investigations have been made to determine the importance of different factors in broiler production.1 It has been concluded that broiler weight and broiler feed conversion are the most important factors determining net income.2 However, high livability is pre-requisite to favorable returns because feed conversion is closely correlated with mortality and cost per pound of broiler.1 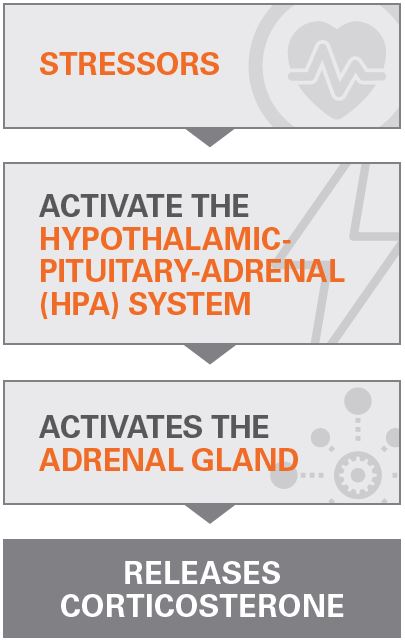 The health and performance of birds, as well as livability, can be influenced by environmental, metabolic and social stressors that the flock experiences. Mortality in a load of finished birds is considered to be influenced by the following three main factors: health status of the flock, thermal stress and physical injury during catching and loading.3

When an animal first encounters a stressor, the neurogenic system is activated.5 Failed attempts to combat or flee from the stressor immediately result in the activation of the hypothalamic-pituitary-adrenal cortical system.5 The activation of this system eventually leads to the proliferation of the adrenal-cortical tissue, which then secretes corticosteroids (i.e. stress hormones).6 Previous studies have shown that corticosteroids have a negative impact on broiler growth and performance.7 Chromium has been shown to reduce the levels of corticosteroids in birds alleviating the negative impact of stress on them.8,9 Furthermore, chromium has been shown to improve livability in birds subjected to different type of stressors.9

Ultimately, if we can lower the corticosterone levels in stressed birds, we can help them grow more efficiently and be better prepared to face disease and stress challenges to maintain high livability. Learn more about stress and the only FDA-reviewed source of chromium propionate on the market today at kemin.com/stress.