Heat, energy, water and oxygen: they’re four essential elements critical to just about every form of life on the planet. Provided those things, even the most infinitesimally small organisms can flourish. In the case of mycotoxin-producing molds, that vigor can become costly for livestock producers.

Mycotoxins are toxic secondary metabolites that are produced by mold in stored grain or growing plants. The production of mycotoxins is essentially a defensive response by the growing mold triggered by an environmental factor, like temperature,1 oxygen,2 pH3 or moisture. Though molds themselves have a relatively short lifespan and are influenced by external conditions, like temperature and moisture, mycotoxins — measured in parts per billion (ppm), a value equal to one penny in $10 million — can have a long residual life in the field, grain bin, feed bunk or animal’s gastrointestinal (GI) system virtually unaffected by their environment. 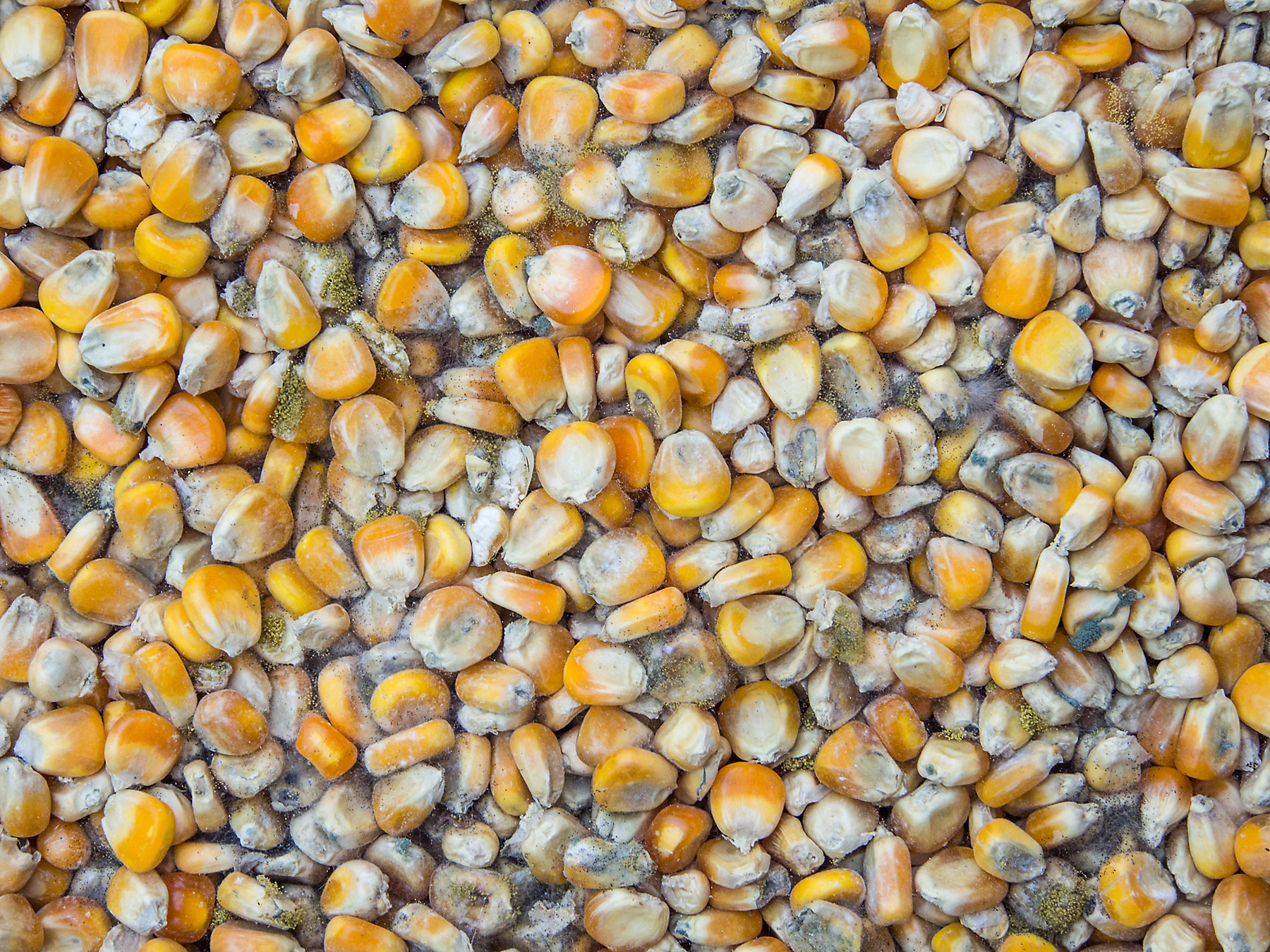 “Mold and mycotoxins are the same thing to most people. But there is a clear distinction between molds and the mycotoxins they form,” said Kemin Product Manager Eugene Rodberg. “Once mycotoxins are formed, you can’t easily get rid of them. You can heat or cool them, and they’re still there. With mold, you can heat, cool or dry it and it dies. The spores may be left, but the mold itself is dead.”

About a Complicated Problem

There are hundreds of types of mycotoxins, all produced by different fungi and environmental factors. According to the National Institutes of Health (NIH), as much as 25 percent of the world’s ag commodities, including feed grains, are contaminated with mycotoxins. Variability in grain growing conditions and how that grain is stored, processed and handled as a feed source contribute to the likelihood a ruminant or monogastric animal will be challenged with mycotoxin-contaminated grains. Aflatoxins, for example, are produced by Aspergillus flavus and A. parasiticus and are found naturally all over the world in warm conditions that favor mold growth. Others, like fumonisins which are produced by Fusarium verticillioides and F. proliferatum, can develop from common crop diseases, like Fusarium root rot in soybean or stalk rot in corn. Trichothecenes, like deoxynivalenol (DON) and T-2 toxin, are produced on many different grains like wheat, oats or corn by various Fusarium species such as F. graminearum, F. sporotrichioides, F. poae and F. equiseti.

“We can have large concentrations of Fusarium mold, but unless it’s somehow been challenged, mold won’t produce a mycotoxin. Fusarium mold has a specific defensive action when challenged that causes production of the mycotoxin,” Rodberg said. “We don’t really know what causes the mold to decide to produce this defensive chemical that becomes the mycotoxin. We just know it produces it as a response to something that’s competitive.”

Variability in Symptoms and Damage

Another factor that makes managing mycotoxins difficult is the variability in symptoms. Each category of toxins and each toxin within those categories affect animals and birds differently. For example, the T-2 mycotoxin causes oral lesions and gut damage in poultry, while deoxynivalenol (DON) is more likely to affect hogs by inflicting GI and later systemic damage through the breakdown of epithelial tissues in gut lining, enabling harmful bacteria to enter other internal system. Zearalenone is an estrogenic mycotoxin, meaning it can cause a wide variety of hormonally-controlled reproductive issues in swine, cattle, horses and other mammals, but very little impact to avian species. Yet, any combination of these mycotoxins may be present in a load of corn that is processed for feed, making it difficult to manage that grain once it enters the livestock feed supply chain. And despite the wide variability among different types of infections, damage to gut health is a common outcome with many mycotoxins. 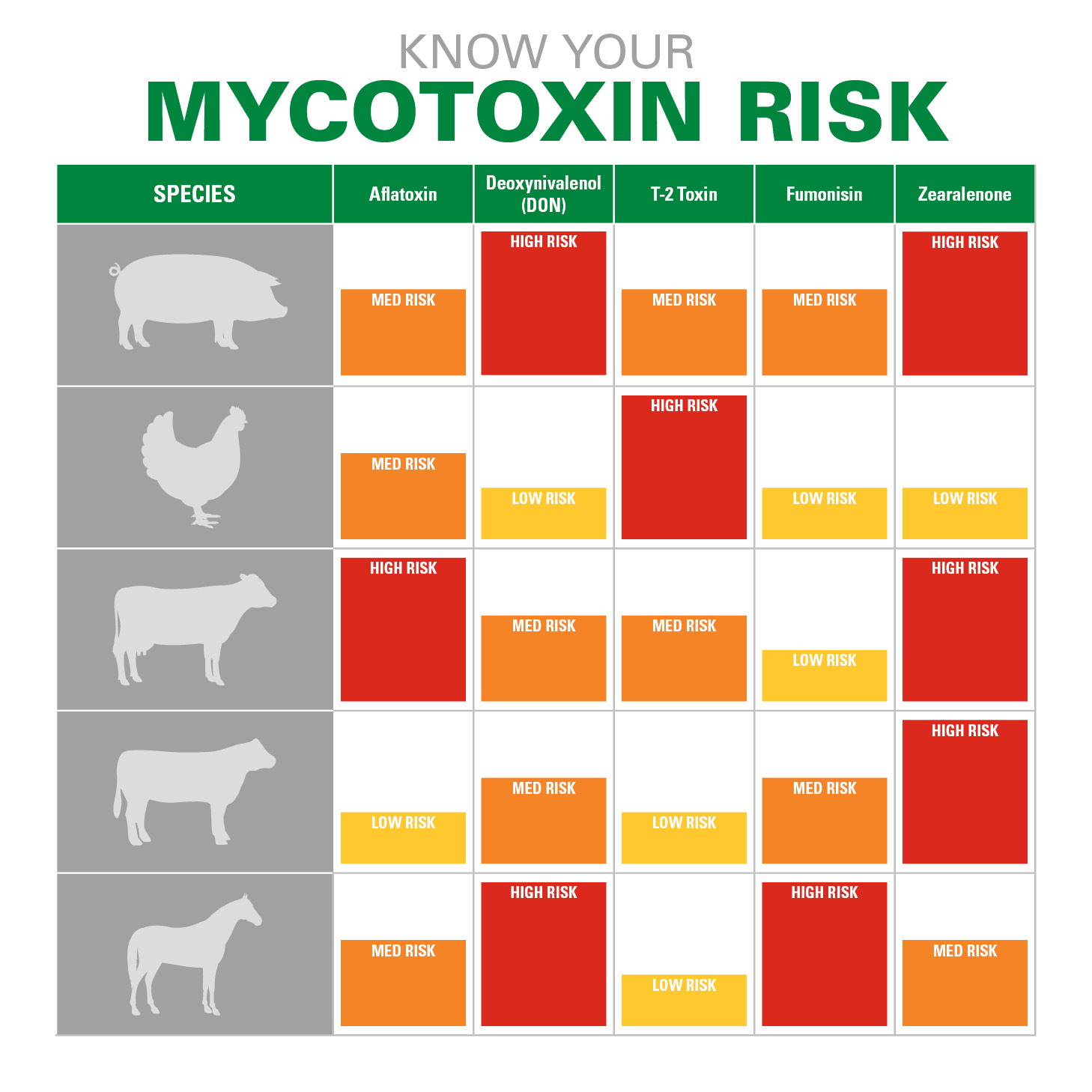 “A big challenge we have is that every animal responds to different exposures and doses of both mycotoxins and the products we use to protect against mycotoxin damage,” Rodberg said. “What we’re learning about dairy cattle right now, for instance, is that a combination of DON with zearalenone is actually a much bigger issue than having zearalenone itself. DON impacts the gut lining, so tight junctions open up and contaminants enter the blood stream. Layer zearalenone on top of that and you have cows with false heats, abortions and reproductive issues. The effect of DON winds up exacerbating the issues with zearalenone because they’re happening at the same time. What’s more, grain testing has shown that when it comes to mycotoxins in feed, co-contamination is the rule, not the exception. Researchers are still learning what combinations or levels of infestation are going to be most problematic.”

Diagnosing mycotoxin damage is also difficult and, in many cases, impossible. Unless there are overt physical symptoms, like oral lesions in chickens, mycotoxin damage to gut health, for example, can sometimes go largely undetected. Animal performance, like rate of gain or milk production, may suffer, but unless animals are specifically tested, it’s difficult to pinpoint a mycotoxin as the cause.

“How much performance drag is occurring because of a low level of a specific toxin? It’s often chalked up as a cost of doing business, and bad feed grain is something producers have to deal with,” Rodberg said. “When mycotoxins are at low levels, producers sometimes don’t even know they have a problem. Ultimately, the amount of damage in the form of performance drag can’t be calculated.”

Given the complicating factors surrounding mycotoxins, reaching a solution and preventing damage to animal health is just as complicated. A truly systemic eradication of mycotoxins in the feed supply starts with an examination of and broad changes to the grain production system. Molds are virtually omnipresent in many corn fields, though they don’t always produce mycotoxins. Fully eradicating mycotoxins requires eliminating the mold that can produce mycotoxins when experiencing some kind of environmental stress. Given the way crops are grown today, that’s becoming increasingly difficult.

“Some molds are emerging as bigger problems as we change our agronomic practices to leave more crop residue on the surface. The soil surface becomes a new petri dish of opportunity for molds, whereas in the past, we would till it under and the soil microbes would break down many of the organisms that now contaminate the crop. Now, we don’t expose that residue and the mold spores on it to soil-borne organisms,” Rodberg said. “Now, with systems like minimum tillage and continuous corn, it changes what we do from a crop management standpoint. Your job as a corn grower is to produce yield, and that may mean doing things that don’t inhibit mold growth. The job of a nutritionist is to learn how to feed that grain, and they may need to come up with new ways to handle molds and mycotoxins.”

In the absence of an effective industry-wide strategy for preventing mold spores from propagating in crop fields from which feed grains are sourced, the livestock sector is faced with a choice between eradicating mycotoxins altogether or protecting animals from potential damage from toxins when consuming contaminated feed. Given the nature of mycotoxins, the former has proven difficult, making the latter the most feasible strategy today.

The Mechanics of Mycotoxin Solutions

While research continues to find ways to knock out mycotoxins altogether, the most effective way to prevent damage today is through the use of additives that specifically address mycotoxin contamination. These compounds, delivered as feed additives or via livestock watering systems, work on a molecular level to move mycotoxins through the GI tract without binding to epithelial tissue in the gut, which would open the door to infections in other parts of the body by loosening the tight junctions in gut tissue.

The act of binding with mycotoxin molecules — some of which are a mere five angstroms in length, a value equal to 0.1 nanometer (1 × 10-10 m) — most often takes place via molecular polarity. Binding molecules are typically around twice the size of the mycotoxins themselves, and essentially envelope the invading molecules, preventing them from attaching to gut tissues and developing larger infections. But binders must be made to tackle a specific toxin, thereby complicating the process of achieving total control.

“All mycotoxins are characterized by their shape and molecular structure. There’s a whole area of toxin-binder research to match up specific binders with the specific molecular structure of different mycotoxins,” Rodberg said. “Aflatoxin, for example, is relatively easy to bind because it’s structure features beta-carbonyl binding locations on either side of the molecule. For less polar toxins, currently there are enzymes being produced, and each one has to be made for a specific toxin. Getting rid of DON is different from getting rid of zearalenone. While polarity is the primary mode of action, we can’t bind with them all the same way, since some don’t have polar ends.”

Addressing mycotoxins depends on providing a supplement that has two key characteristics: first, the structural makeup that enables targeting of toxins, then the ability to effectively sequester and usher targeted toxins through the entire GI system to be excreted instead of allowed to bind with soft tissues in the gut lining.

This combination is readily available in KALLSIL, an enhanced zeolite mineral-based feed supplement that, among other benefits, helps reduce the effects of performance issues due to molds and mycotoxins taken in when an animal consumes contaminated feed. The inspiration behind using zeolite, a sodium calcium aluminosilicate mineral, comes straight from animal behavior observed for generations.

“We have strong supplier partnerships to provide zeolite with molecular openings the right size to make KALLSIL have a wide spectrum of efficacy,” Rodberg said. “With KALLSIL and what we’ve learned from a research standpoint, we’ve developed a product that has very strong capabilities to address feed quality problems.”

The specific molecular design of zeolite, the key ingredient in KALLSIL, helps the mineral capture more mycotoxin molecules, rendering them unable to cause inflammation that can lead to gut health issues and more systemic issues.

“We have a great zeolite mine we work with that can provide material with molecular openings the right size to make KALLSIL have a wide spectrum of control,” Rodberg said. “With KALLSIL and what we’ve learned from a research standpoint, we’ve developed a product that has very strong capabilities to address mycotoxins.”

Given the complexity of identifying mycotoxin damage, it can be difficult to define the return of supplementing KALLSIL to a beef, dairy, swine herd or poultry flock. But given the fact that there is such a high prevalence of mold and mycotoxin in feed grains around the world and the relatively low cost of adding KALLSIL to feed rations, Rodberg said there is virtually always payback.

“In our research over the years with performance drag and low-level mycotoxin infections, we found that when administering two pounds of an enhanced zeolite per ton of feed, one egg producer ended up with two more eggs laid per hen. That was a huge win for him,” he said. “Another producer was feeding his beef herd a ration with distiller’s grains and high-moisture ingredients and had an increased percentage of abortions in his heifers. The abortion rate returned to normal when the producer started giving them around 3-4 lbs./ton of an enhanced zeolite.”

The bottom line is there is a return with KALLSIL. Whether it is 5-1 or 10-1 depends on the feed quality problems the producer’s facing and how well he or she knows how the animals are performing.”