We have invested more than half a decade to design a unique C3 model, to achieve the best results from supplementing Choline in the next generation of encapsulated Choline solution “CholiGEM”.

The main advantages of CholiGEM:

Thanks to the unique C3 model and 60% Choline chloride concentration, CholiGEM’s Choline attains the highest peak in the cow’s blood.

The science behind the innovation

This publication shows that:

This research outcome brings the most advanced insights on the whole GI tract pattern of release and availability of Choline to the cow. These findings were only possible when an extensive blood sampling was done till 48 hours post supplementation of different encapsulated Choline chlorides. 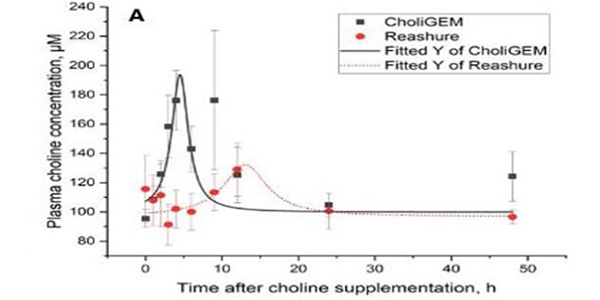 What does this mean for the cow?

Also the results on the cows are clear. Data analyses from 27 published studies showed an increase in postpartum dry matter intake (from on average 19.1 to 19.9 kg/d; p < 0.01) and milk yield (from on average 31.8 to 32.9 kg/d; p = 0.03, figure 2) in cows receiving encapsulated Choline chloride. Milk fat yield and milk protein yield were also increased (p ≤ 0.05), without changing milk protein and fat contents.

What is the difference with other products?

Today, most of the commercially available encapsulated Choline chloride products contains only 25-28 % Choline chloride. This lower level of Choline chloride in the product has always been challenging for a nutritionist to balance cost and space in the diet formulation.

Higher concentration of Choline chloride in CholiGEM with superior bioavailability helps in creating up to 30% more space in premix formulation. This also helps in lowering carbon and water footprints from manufacturing and transportation of CholiGEM, based on per kg bioavailable Choline chloride produced and shipped in the market. This way, CholiGEM contributes to green foot printing.

LEARN MORE FROM AN ADSA ABSTRACT

The uniqueness of the C3 model

Kemin’s Scientists have invested more than half a decade to design a unique C3 model, to achieve the best results from supplementing Choline in the next generation of encapsulated Choline solution “CholiGEM”.  The uniqueness of this model lies in:

We developed our own core with an expectation to coat with technical ingredients. Various physical characteristics were considered during the development phase of these granules: smooth core surface, controlled hygroscopicity, desired specific gravity, homogeneity, standard particle size, stability, desired level of active load of Choline chloride in the dry granules and resistance during physical processing.

We encapsulate the Choline core with different levels of technical ingredients, improving the strength of the coating. This coating isn’t too strong or too weak, but a perfect scientific balance. Excellent results are obtained with our scientific balance of 60% Choline chloride in the encapsulation.

All the benefits for you

CholiGEM is a breakthrough innovation in Choline nutrition which has raised the bar for higher performance from ruminant animals by providing the superior bioavailability of Choline in cows along with greater flexibility for application with green footprinting. All the benefits are available for you: