For over a decade we have tackled the challenges of mycotoxins and contaminated feed within the pig industry.

Sadly, we know that mycotoxins can have a damaging effect on pigs and, therefore, on production. These secondary metabolites of fungi (molds) have varying toxic properties and unfortunately, the consequences of mycotoxins (or clinical mycotoxicosis) are not always clear. We often see the more indirect effects of mycotoxin contamination, for example, lowered immune systems in pigs, which can lead to an increase in disease.

That’s why at Kemin, we strive to strengthen the immune system of pigs to prevent them, as far as possible, from negative mycotoxin effects. And we do this from the onset and by safeguarding organs and tissues — thus mitigating performance and productivity losses as far as we possibly can.

Mycotoxins can contaminate almost all agricultural ingredients and this is the reason why we believe it’s so important to control them. Even the smallest instance of mycotoxins can impair a pig’s intestinal health, immune function, and/or pathogen fitness, resulting in altered host-pathogen interactions and therefore a higher susceptibility to disease. Moreover, mycotoxins can impact the effectiveness of vaccinations and can also lead to a range of pathological problems i.e. toxicity in the liver and kidney as well as estrogenic responses which are very problematic for sows and their piglets. In turn, all of this, unfortunately, leads to productivity losses.

It’s important to know that feeding pigs a Fusarium (T-2, DON) mycotoxin-contaminated diet increases the susceptibility to salmonella. The pathogenicity of E. Coli, ETEC, as well as SEPEC, in pigs is increased when pigs are fed a mycotoxin-contaminated diet. Respiratory disease in pigs is often caused by the combined effects of a range of pathogens and predisposing factors. For instance, one predisposing factor is fumonisins — well-known for causing pulmonary edema in pigs and this may consequently facilitate M. hyopneumoniae infection, a primary pathogen resulting in respiratory diseases in pigs.

Further to this, mycotoxins promote the incidence of PRRS (Porcine Reproductive and Respiratory Syndrome) — one of the most challenging problems for farms since it significantly impacts a pig’s productivity in comparison to other syndromes. What is more, is that the exposure of piglets to fumonisins increases their risk for PRRSV disease.

Sadly, our research has shown an underestimation of mycotoxins due to:

Learn more about Mycotoxin Management in our digital brochure

Protecting pigs from the potentially negative effects of mycotoxins is key. Therefore, we provide total scientific support through our innovative services and extensive research on the topic of mycotoxins.

This is done through our unique Mycotoxin Management Toolbox — the product of over a decade of industry experience and research. 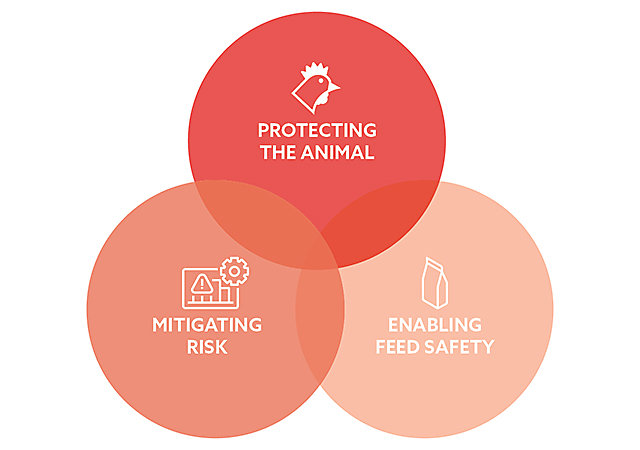 Our unique toolbox helps us support animal nutritionists and health specialists when it comes to ensuring safe and top-notch feed formulations — leading to healthier pigs and improved profitability.

Our Mycotoxin Management Toolbox comprises 3 main activities supporting you by:

Kemin’s Customer Laboratory Services (CLS) helps you when it comes to the overall reduction of mycotoxin risks in pigs, and comprises:

New insights on mycotoxins come about daily. Hence, at Kemin, this means we need to be on top of the latest developments to adapt these into tangible and effective solutions supporting you in the reduction of mycotoxins in pigs.

Our TOXFIN range provides you with the below solutions to lessen the impact of mycotoxins and further the production of safe feed: 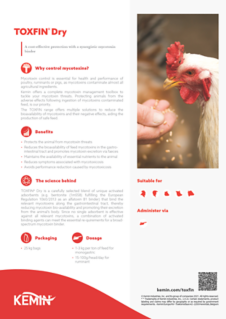 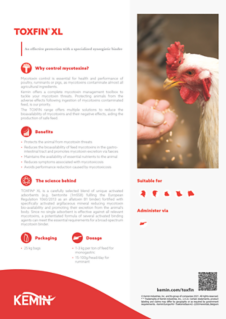 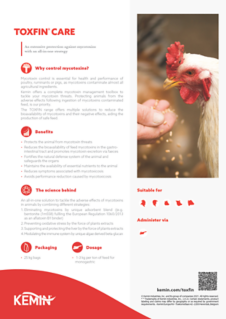 Kemin’s Myco CURB is our effective mold inhibitor that works towards preserving grains and preventing mycotoxin contamination. Stabilization of the grains and oilseeds with Myco CURB helps establish optimal nutritive value in feed and provides natural overall protection. The main advantages of Myco CURB are that it: 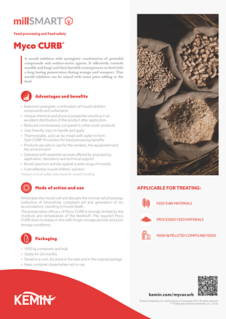 Kemin’s Customer Laboratory Services (CLS) supports you in conserving your feed safety and quality. And we do this through our Routine Mycotoxin Screening of Feed Samples. During this process, we repeatedly screen thousands of feed and raw material samples. This enables us to generate a massive database, which additionally demonstrates regional and seasonal mycotoxin contaminations. All data are captured in area-specific surveys. Furthermore, after this extensive and detailed screening, a tailor-made prevention program to tackle mycotoxins is created for you.

We help you to prevent the adverse effects of mycotoxins in pigs.