Four Reasons Mycotoxins Should be Top of Mind this Year

When livestock and poultry producers think of mycotoxins, they often think of the big six: aflatoxin, deoxynivalenol (DON), T-2 toxin, fumonisin, ochratoxin and zearalenone. The problem is, there are hundreds of different mycotoxins, all produced by different molds, and each toxin can impact animals and birds differently. Further, grain growing conditions, storage settings and more can influence the mold and mycotoxin profile of different grains.

For producers to properly address the perennial mycotoxin challenge, understanding the risks mycotoxins pose to herd or flock health and performance is key. Furthermore, with many mills switching from old crop to new crop grains, it’s the perfect time to fine-tune mycotoxin strategies. Knowing what mycotoxins are in your grains is critical, but it’s also important to remember that not all mycotoxins – or their negative effects – are easily detected. So, what mycotoxin risks should be top of mind this year? 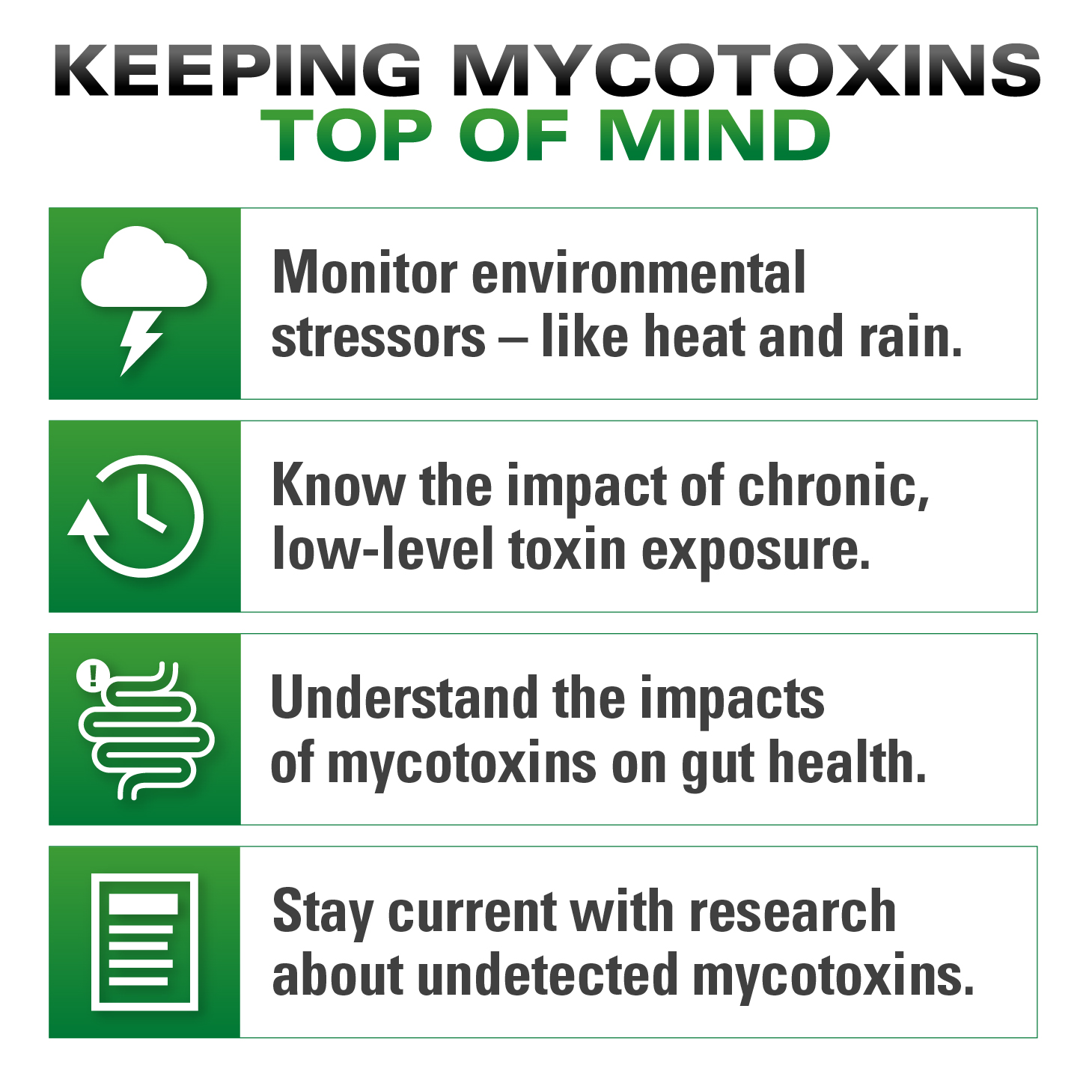 In contrast to recent years where wet weather and Fusarium mycotoxins reigned, the warmer, drier weather in 2020 means an increased risk for aflatoxins. Elevated aflatoxins are particularly problematic because aflatoxins – a group of carcinogenic chemicals produced by Aspergillus molds – are among the most menacing of mycotoxins.

With a FDA action level of 20 ppb, aflatoxins pose significant risk to corn growers and livestock producers alike.1 Aflatoxins can cause liver damage and be harmful or fatal to livestock. Worse yet, animals fed aflatoxin-contaminated grains can transfer these highly bioavailable molecules to meat, milk and egg products, thereby posing a significant human health hazard.2 To protect your animals and end consumers, knowing aflatoxin levels in incoming grains is key.

2. Low-level mycotoxins can have a big impact

Producers can often diagnose signs of acute mycotoxin exposure through overt physical symptoms, like oral lesions in chickens. However, the chronic effects of continuously feeding grains with low levels of toxins, say on damage to the intestinal barrier, are much more difficult – in many cases impossible – to pinpoint as a source of performance loss.

Recent research demonstrates that chronic, long-term exposure to dietary mycotoxins – when fed below regulatory threshold levels – may impact the immune system, intestinal integrity and physiology of animals.3,4 So, although low level toxin exposure or mycotoxin co-contamination may not cause clinical signs of disease, they may be among the biggest factors in terms of losing money to reduced animal performance.

3. Mycotoxins and oxidative stress are linked

From disrupting intestinal barrier integrity to altering protein synthesis and mimicking estrogenic molecules, mycotoxins have very diverse effects on livestock and poultry. But, did you know oxidative stress has been identified as a major trigger of the toxicity of all six major mycotoxins? 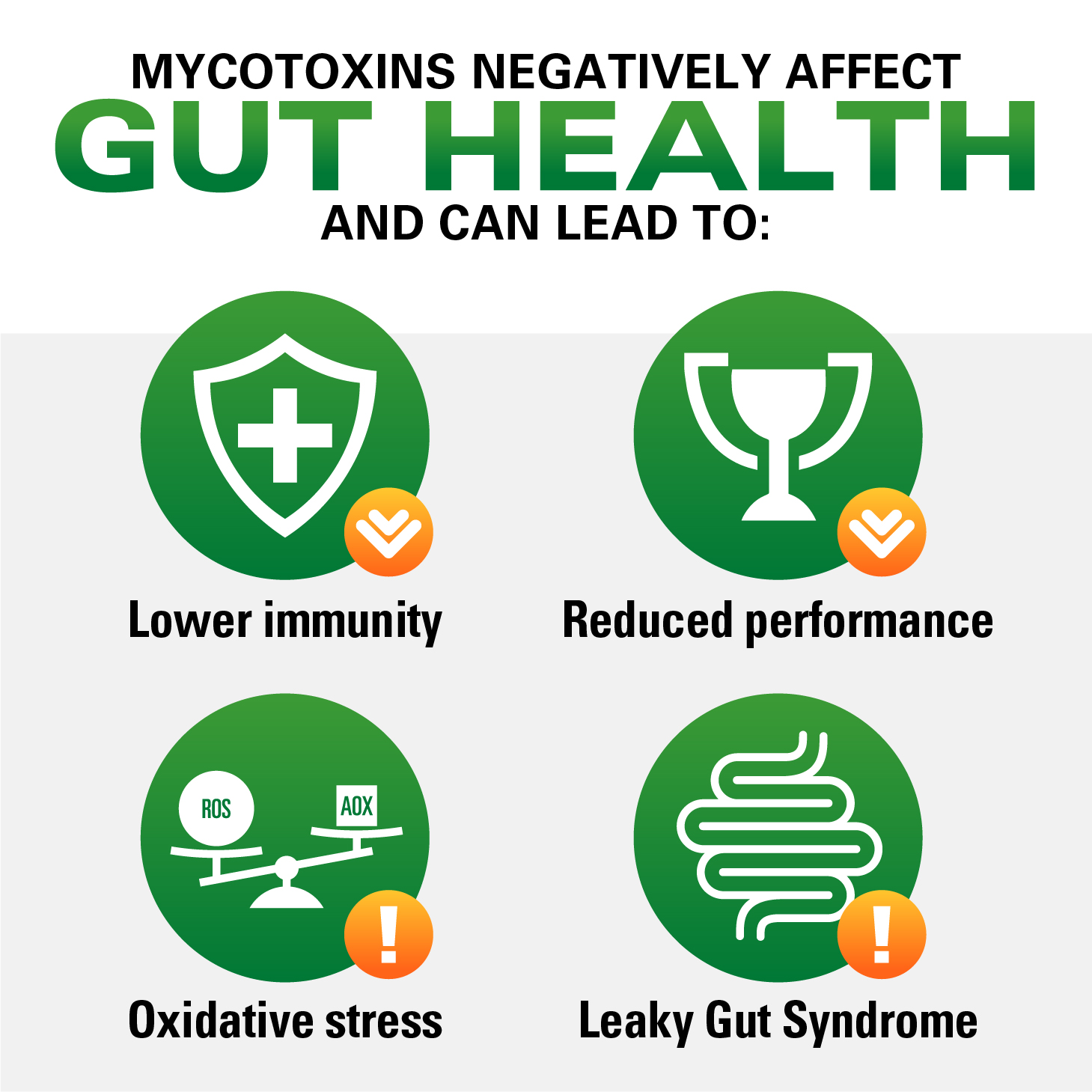 While reporting on mycotoxins has increased in recent years, the truth is of the 300+ mycotoxins known to contaminate animal feed, the majority go undetected today. Research indicates undetected toxins – like masked and emerging mycotoxins – are frequent co-contaminants in corn, wheat and barley that contain other common mycotoxins.6,7

Masked mycotoxins, like DON-3-glucoside and zearalenone-14-glucoside, are typically less toxic than their parent mycotoxin. However, the “unmasking” of these mycotoxins in the digestive tract, or by gut microbes, may lead to increased bioavailability of the free mycotoxin form.8,9 Moreover, little is known about the toxicity of emerging mycotoxins because they are neither routinely determined nor legislatively regulated.7 Research is still needed to better understand the risk these undetected toxins pose – alone or in combination – to livestock and poultry health.

Addressing the perennial mycotoxin problem would be simpler if mycotoxins were consistent over time. Unfortunately, the mycotoxin equation has multiple variables, many of which have limited research or remain undetected. For producers looking to fine-tune their mycotoxin management strategies this fall, an integrated, preventative approach is key. Managing grain quality through use of mold inhibitors, implementing a comprehensive mycotoxin testing program for incoming grains and inclusion of flow agents to neutralize dietary toxins can help ensure your herd or flock is best set up for success.

For more information about solutions to address the risk of mycotoxins in your operation please visit kemin.com/kallsil.