Mycotoxins are secondary metabolites produced by fungi that grow on crops in the field (field mycotoxins) or during storage time of feed and raw materials (storage mycotoxins), as such entering the feed chain, compromising animal health. The major fungi families producing mycotoxins that cause problems in animals and humans are Aspergillus, Fusarium, Claviceps and Penicillium. In total, more than 700 mycotoxins have been identified, and some of them, like Aflatoxin (AFLA), Deoxynivalenol (DON), Zearalenone (ZEA), Fumonisin (FUM), T-2 and Ochratoxin (OTA) were identified as major cause of economic losses in the agriculture industry.

Weather conditions during the growing season are the most influential parameters for mycotoxin production, causing a high year to year variation in the mycotoxin contamination profiles. Although exceeding the EU regulatory and guidance levels for mycotoxins is observed, low level contamination is also very common. In addition, mycotoxin co-contamination is the rule rather than the exception. Individual mycotoxins present a unique treat, but more important is to consider the synergistic effect of multiple occurring mycotoxins and their interaction with diseases.

Mycotoxins give rise to many different pathological effects in animals and humans such as toxicity in the liver and kidney, defects of central nervous system and estrogenic responses. These pathologies lead to lower animal performance and productivity. While poor animal performance is of economic importance, the effect of many mycotoxins on the immune system of the animals is of increased concern. Research shows several mycotoxins could impact vaccination efficiency. Several studies have also indicated that the presence of moderate to low amounts of mycotoxins in feed rations increases the susceptibility of animals to viral, bacterial and parasitic diseases. Not to forget the negative impact of mycotoxins on the intestinal morphology and function compromising gut health. 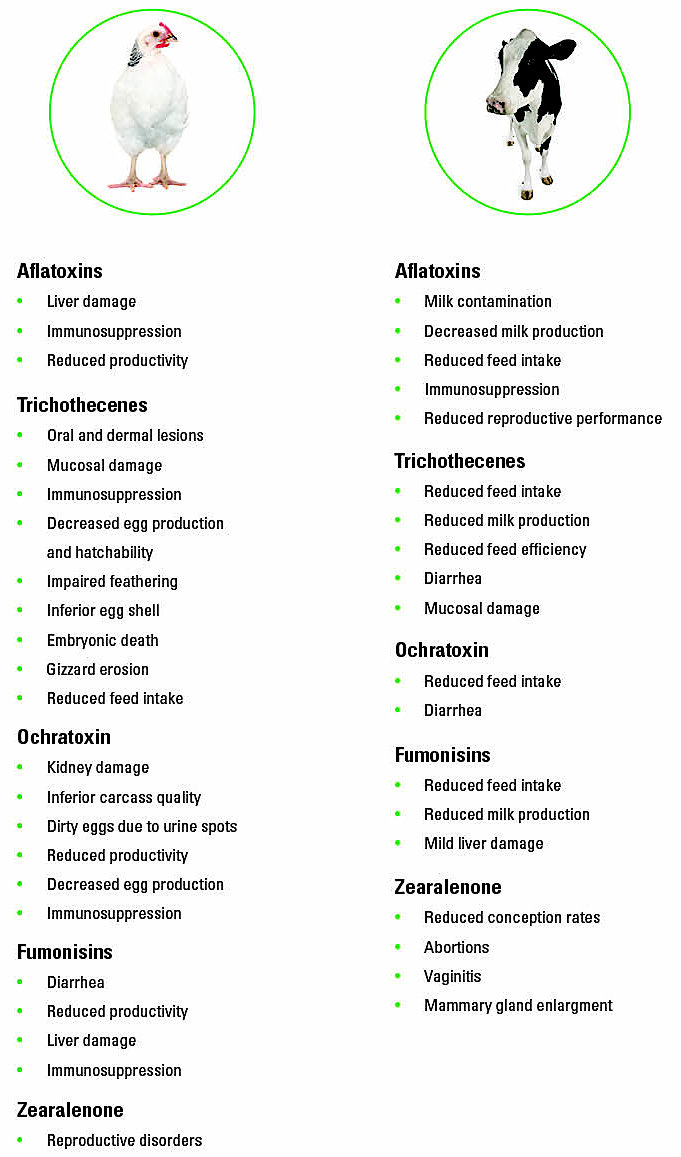 Animal diets are composed primarily of a mixture of several feedstuffs such as cereal grains, soybean meal, animal by-product meals, fats, vitamin and mineral premixes. Out of these, cereal grains serve as the major source of toxic contaminants which when ingested by the animal may cause deleterious effects on health, performance and production. Most commonly known toxic contaminants are mycotoxins produced by toxic fungi which have ailed the industry since the beginning.

Fungi are ubiquitous, and formation of mycotoxins can occur in all agricultural commodities under appropriate ­field or storage conditions throughout the animal feed supply chain. Fungi are a normal part of the microflora of standing crops and stored feeds, but the production of mycotoxins depends upon the fungi present, agronomic practices, the composition of the commodity and the conditions of harvesting, handling, and storage. (Bryden, W. L. 2009).

Mycotoxin management is taking a 360-degree approach to prevent mycotoxicoses in animals. There is no one single practice that guarantees complete eradication of mycotoxins from the feed and food. It is a careful identification and check of all the critical points in raw material and feed value chain.

Major critical points to consider are: