Taking Down a Costly Swine Disease

For almost a century, swine dysentery has been the source of considerable economic losses for hog producers around the world. Though producers do have proven control measures at their disposal today, they can be extremely costly.

Swine dysentery directly affects a pig’s ability to eat and gain weight, consequences that have the potential to dramatically decrease feed efficiency. With feed representing up to 70% of the total cost to raise a pig to finishing weight, a disease that sharply reduces feed efficiency carries high costs to producers. 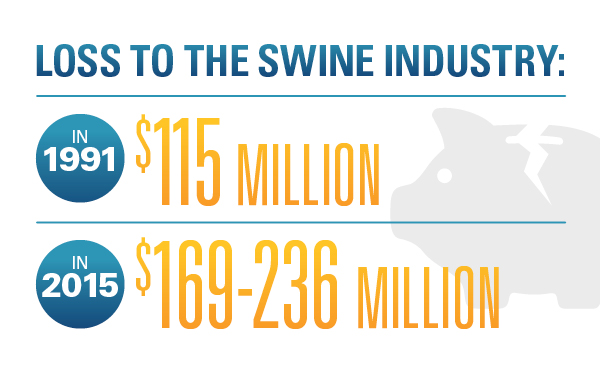 Antibiotics offer some protection from the bacterial disease, but required withdrawal periods make it difficult to rely on them for consistent control. Additionally, a thorough antibiotic program can be expensive. Isolating infected animals, changing production schedules and thoroughly cleaning facilities are important to stop the spread of swine dysentery. With today’s production schedules, the logistics of isolating animals and delaying farm repopulation carry high costs and are all but impossible on many operations.

Swine dysentery, or Spirochaetal colitis, was first reported in 1921. For the 50 years that followed, the root of the disease was unknown until researchers discovered it is caused by the bacterial agent Brachyspira hyodysenteriae. Based on past widespread incidence of the disease, data indicates it can cause up to $236 million in economic damage to the U.S. hog herd annually.

The most common clinical sign of swine dysentery is diarrhea, often accompanied by mucus or blood secreted by intestinal lesions. The diarrhea leads to dehydration and digestive disruptions, resulting in animals that either lose their appetite or will continue eating, but fail to add weight. Swine dysentery has an incubation period of 5-21 days preceding symptoms and can be fatal, with morbidity and mortality up to 50% among untreated pigs.

“Swine dysentery is passed pretty easily from animal to animal. It causes more what we’d call morbidity than mortality. You may have some mortality, but morbidity is an issue because animals won’t grow like they should,” according to Kemin Technical Service Manager Ana Lucia de Souza. “In a barn, you’ll see infected pigs half the size of the normal ones, and infected animals will have diarrhea with blood in it. When you see it once, you’ll never miss it again.”

Though pigs (usually three weeks of age or older) are the only ones that become symptomatic from the disease, rats, mice, dogs, birds and flies – all common denizens of today’s large hog farms – are also potential hosts of the pathogen that causes the disease. It can also survive for up to 18 days in the soil or 60 days in a water supply. Infected sows may not become symptomatic, but can transmit the pathogen – and resulting symptoms – to piglets. Altogether, the ease of transmission and multiple host possibilities on a farm make swine dysentery difficult to control, especially in larger animals, like on a finisher farm.

“Any organic material will cause proliferation. On top of animal-to-animal contact as a cause, it will stay in any organic material on the farm – fecal matter and dirt on the floor and left under the slats will have the disease on it, it will be in the lagoon and in the rodents around the farm,” de Souza said. “Once you have the disease, it can be difficult to get rid of. As soon as you can get rid of it and get the farm cleaned up, you are fine. But it can come in again with any infected animal.”

Early swine dysentery treatment options were largely comprised of organic arsenicals and later, antibiotics. Though much more effective in controlling the disease, the latter is not the viable option it once was because of antibiotic withdrawal timeframes due to concerns about resistance and overall animal and consumer health.

Treating swine dysentery has considerable implications for producers, be it in the cost, distribution and management of antibiotic treatments or herd logistics management required to prevent the proliferation of swine dysentery. Though de Souza said antibiotics like Denagard® – a common feed additive – have a smaller price tag than the cost to take more comprehensive management measures, using such a treatment has implications of its own, chief among them is the growing scrutiny of such products’ use in livestock animals like pigs.

“At high doses, products like these are extremely costly, but still cheaper than depopulating a farm. But, you must have a feed mill that can manage the current feed type and an extra feed type to include the antibiotic,” de Souza said. “If your mills are working near your production capacity, you may not be able to make it work since you have to only treat the animals on contaminated farms. A lot of nutritionists I talk to today are always thinking about the cost benefit of these kinds of treatments. It can create other issues, however, if your feed system will not allow for that extra feeding to administer the treatment.” 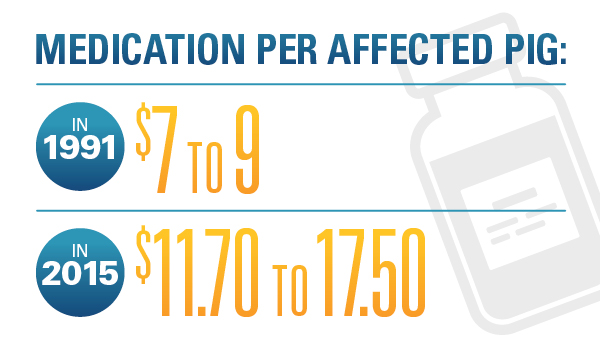 With some medical treatments, there are also withdrawal periods. Many medicines cannot be administered within a certain timeframe leading up to an animal’s processing, and that can sometimes leave the window open for subsequent untreated infection. Withdrawal periods have major management implications for producers using antibiotics as their primary disease control measure.

“Swine dysentery can be cured, but animals can be contaminated again. Depending on when you administer a treatment, you have a withdrawal period before harvesting the animals, so that is a big deal,” de Souza said. “It’s not only just before harvesting the animal, but you have to make sure you don’t have any residue of treated feed in the barn. You have to ensure the feeders are all properly cleaned.”

Depopulation as a Control Measure

The other main option for treating swine dysentery is general depopulation and removal of all potential host material at a farm. This process can be costly, time-consuming and difficult given the number of different host materials and animals present on a hog farm.

The typical depopulation process to control swine dysentery at a hog farm is between 10 and 16 weeks long. That’s a long time in swine production. You’ll empty the barn, clean it out and bring pigs back in afterwards in hopes that the disease doesn’t come back. Depopulation helps to contain the disease, but it is not fool-proof,” de Souza said. “Even if you treat with antibiotics, you have to remove as much organic material as possible, which is pretty difficult. After doing that, some people will fire the environment or whitewash the inside of buildings with lime and water. It works very well, but you have to let it dry thoroughly before bringing pigs back in.”

Halting production at a hog finishing barn, for example, can take a considerable segment of a hog farm out of production for up to four months, a disruption that is not practical for many producers. The right solution – usually a combination of different tactics like these – depends on an operation’s facilities, feeding systems, overall size and financial standing. It requires the right mindset among producers and herd managers, too, something that can be just as large of a hurdle as the disease itself.

“When you go in and see disease control as only a cost and not as an investment in your operation, you sometimes don’t think in terms of prevention and instead take a ‘let’s do nothing and see what happens’ approach,” de Souza said. “You have to understand that you are adding value to your production system that will control something that otherwise will cause major losses. But, sometimes business milestones and performance indicators are measured in different ways. If your key performance indicators (KPIs) put an emphasis on other things, you can sometimes inadvertently prevent good things from happening. You want to think of swine dysentery control as something that will make your business better.”

Formic acid has been used to control select pests and bacterial infections in recent years around the world. The acid has been shown toxic to the eggs of pests like the Varroa mite, which has been a culprit of bee population declines in North America. An acidifier, formic acid also been found effective in managing swine dysentery and improving gut health by creating antimicrobial activity toxic to the disease at its most common points of origin.

Molecules of the bacterial agent that causes swine dysentery are encapsulated by a mucus membrane that makes them impervious to damage or breakdown from stomach acids, so they more easily pass through an animal’s stomach and into the large intestine. Delivering formic acid through the digestive system up to that point helps make it inhospitable to the bacteria, either killing it or expelling it from the gut.

“I think formic acid can be used when animals go from a nursery facility to a finisher. At that point, they’re not small anymore, but they face a lot of stress in transportation, different management and potential gut health issues. I think of this acid as a shotgun blast that can help protect the gut from pathogens to which animals are more susceptible during high-stress times,” de Souza said. “Overall attentiveness to gut health among producers will continue to grow in the next couple of years. There is an increasing understanding of how disease and stress contribute to gut health issues, and new products may help open the door to better dealing with these issues through feed acidification.”