Individually wrapped, high-moisture alfalfa bales, often simply called baleage, has been around for a long time. The ability to cut hay in the morning and store the hay in a tightly wrapped package before rain reduces forage quality, is extremely appealing. Not only does baleage offer risk management against weather, the increased palatability of baleage also results in less waste compared to dry hay especially when fed in round bale feeders.

There are many considerations when attempting to make high quality baleage. One aspect is bale density. Recent research at Penn State University helps producers understand the importance of making dense bales.1 This study evaluated balers set to bale at maximum density traveling at 3 different speeds 3.2, 4.8 & 6.4 km/h (4, 8, and 12 mph). Bales were wrapped within 4 hours after baling at a minimum of 6 mil of wrap on each bale to exclude oxygen and control heating.

After 28-days of storage, the research team found bale density directly impacted baleage quality. Across all speeds, the greater the bale density, the lower the pH of the bales (Figure 1). This indicates proper fermentation of the sugars available under anaerobic conditions. As forages ferment, anaerobic bacteria convert sugars to acids during the fermentation process. A low pH is desired to help increase storage time, reduce mold and wild yeast growth and reduce forage heating during feed out. 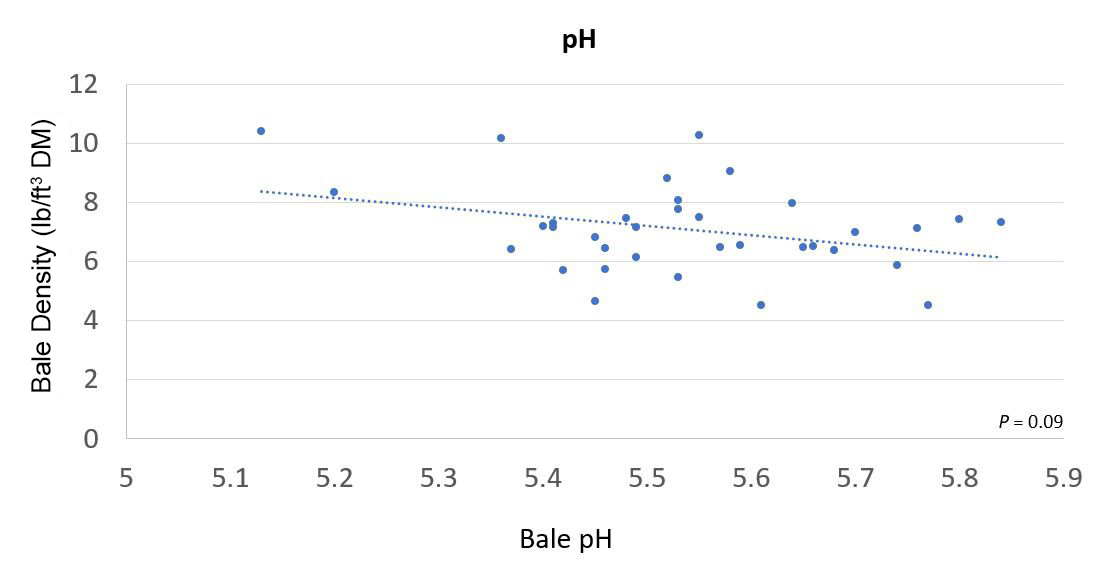 An additional challenge for producers when trying to make high quality baleage, fermentation is slower than other silage. There is less sugar available for growth of lactic acid producing bacteria in baleage, resulting in a longer period of fermentation. During this extended fermentation, mold and wild yeast growth reduces the quality and quantity of the forage.

A research team at Kemin Industries,2 completed an evaluation using Silage SAVOR® Liquid silage preservative on baleage of approximately 40% moisture (60% dry matter). Silage SAVOR Liquid is a blend of organic acids, formulated specifically to reduce mold and yeast growth in ensiled crops. Treated bales received an application of 500 grams of the organic acid blend per ton of hay (approximately 830 grams per ton of dry matter). After a 40-day fermentation period, each bale was weighed, and dry matter retention was calculated. Core samples were taken from each bale and samples were sent to a laboratory for analysis of fermentation properties including pH, lactic acid, acetic acid, propionic acid, ammonia-N and total acids.

Table 1. Dry matter of alfalfa baleage before and after 40 days of ensiling.

Not only was dry matter retention enhanced with application of Silage SAVOR Liquid, but other fermentation parameters improved (Table 2). By controlling the growth of non-beneficial mold and wild yeast, the application of the blended organic acid reduced competition for lactic acid-producing bacteria, resulting in a more complete fermentation.

Table 2. Fermentation properties of alfalfa baleage after 40 days of ensiling.

The Ontario Ministry of Agriculture, Food and Rural Affairs has an excellent website with more information on making high quality baleage.3 In summary, they have 8 major recommendations:

High quality baleage is an excellent addition to any cattle ration. However, making high-quality baleage requires the same attention to detail required for any forage. By addressing each of these steps, you can make better baleage this year, and every year.

If you ahve a question about our products or services, or just want more information, fill out the form below and someone on our team will be in contact with you.