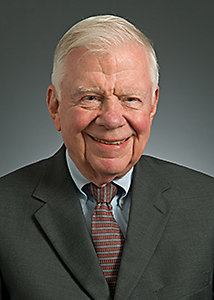 Chairman of the Board

In 1961, when he founded a company to develop innovative agricultural products, R.W. Nelson couldn’t have imagined that Kemin Industries would one day touch more than 3.8 billion lives worldwide every day with unrivaled expertise at the molecular level.

Kemin Industries began 57 years ago on a shoestring budget in a vacant wool barn on Des Moines’ east side. With five children to feed, clothe, and educate, R.W. and his wife, Mary, invested the $10,000 in their savings account in the business, which offered two product lines – Silage Preservatives and feed flavors – to be sold throughout the Midwest. The Nelsons had strength behind them, both in the Nelson and Kelleher family members, as well as in their work ethic and ability to scale obstacles. Their business grew quickly, first exporting to overseas markets before the end of the decade.

Kemin has quadrupled in growth since its humble beginnings in 1961, now manufacturing and distributing over 500 specialty ingredients used in the feed, pet food, health and food industries, as well as the nutrition, horticulture and textile markets. The company’s products containing molecules extracted mainly from plants run the gamut, from the animal food flavorings that propelled Kemin’s early growth, to food ingredients, to FloraGlo® Lutein, a purified form of lutein found in marigolds that is considered to reduce the risk of and, among some individuals, progression of, age-related macular degeneration.

By all accounts, R.W. has earned the right to take it easy, yet he remains a vital leader, playing an integral role in the company’s success.

“I have several motivations to go to work every day at Kemin,” R.W. says. “I believe work is a privilege. My health is good, and I can continue contributing to Kemin, which gives me a lot of personal satisfaction.

“Over the years, Kemin has made contributions to the quality of life for many people,” he says. “Each year, we contract with about 25,000 farmers around the world to grow marigolds and other specialty crops. Kemin purchases the specialty crops from over half these farmers, which contributes to their annual incomes. We know this extra income has given their children a better education.  If our farmer growers are living better as a result of the crops they grow for us, then we receive a lot of satisfaction from the ongoing process.”

Throughout its history, R.W. has guided Kemin’s growth with a deft and pragmatic hand, allowing the company to expand domestically and internationally with very little financial risk. Stalwart business practices, such as tiptoeing into markets and establishing sales before making permanent investments, put Kemin in a financial position that fueled its rapid growth in the 1970s.

Those early successes, based on a parallel of good science and good business practices, are a microcosm for how Kemin does business today. The founding values of hard work, integrity and a moral obligation to improve the lives of consumers and employees alike are omnipresent in the company’s 14 business units. Together, these units share a commitment to improving the health and nutrition of the world in the most sustainable way possible.

R.W. holds four patents and has been recognized worldwide for his innovations. He received citations from two presidents:  the President’s “E” Certificate for Exports form President Nixon in 1971, and the President’s “E” Star Award for Excellence in Export from President Carter in 1978. R.W. also received the U.S. Department of Commerce’s Export Award in 1972, the State of Iowa Economic Impact Award in 1987, the Ernst and Young Entrepreneur Achievement Iowa Award in 1991 and the Iowa Biotechnology Association’s Entrepreneur Achievement Biotechnology Award in 2004. He was inducted into the Iowa Business Hall of Fame in 2006.

R.W. has served on more than a dozen boards and committees for industry trade groups, banks, the American Institute of Entrepreneurs, Wellmark Blue Cross Blue Shield, Drake University, private primary and secondary schools in the Des Moines Diocese and the Greater Des Moines Committee, a group of business luminaries founded in 1907 to share information about important topics in the community and nation. He is a member of the American Chemical Society and the American Feed Industry Association.

A graduate of Dowling Catholic High School, R.W. received Bachelor of Arts degrees in biology and chemistry from Drake University. He served in the U.S. Army Air Corps from 1945 to 1947, and was honorably discharged as a corporal. He earned service ribbons while deployed to the Philippines at the close of World War II.