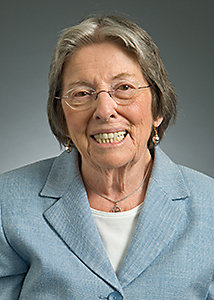 Perhaps no other person in the Kemin Industries family epitomizes the “Kemin cares” core value more than Mary Nelson, who co-founded the now global manufacturing company with her husband, R.W., in a vacant wool barn on Des Moines’ east side in 1961.

Mary has “done it all” at Kemin. Since 1975, she has supervised administrative staff; managed customer service, printing and human resources; acted as a liaison with attorneys on legal matters; managed the Kemin trademark portfolio; served on the board of directors for Kemin and its affiliated family of companies; participated in strategic planning, budgeting, special projects and administrative decisions for U.S. and global companies; and assisted in the presentation of training programs for sales personnel worldwide.

“I’ve enjoyed and learned from each position I’ve held at Kemin,” Mary says. “I believe in the mission, values and vision of the company. My personal goals are fulfilled through my work; I have achieved a standard of living that I enjoy; and I work with a group of people I admire, like and consider my friends.”

With such a range of duties relating to the company’s overall health and wellbeing, Mary lovingly refers to Kemin as her and R.W.’s “sixth child.” The company is also an embodiment of the values the Nelsons instilled in their children, including a moral responsibility for corporate citizenship.

As a member of the Kemin Charitable Contributions Committee, much of Mary’s energy is spent guiding the company’s corporate philanthropic giving. She is devoted to creating a culture that reaches out to the disadvantaged and those in distress, both locally and globally.

“We have a responsibility to return to our community and the world a portion of what we earn from our endeavors and that of the people who work with us,” Mary says.

When Hurricane Katrina devastated the Gulf Coast, Mary organized fundraising efforts to help residents living in the storm’s wake. At her urging, Kemin employees raised $30,000 to replace fishing boats lost to a tsunami that ravaged a village in India, where Kemin has a significant presence. In China, an important base for Kemin operations, Mary coordinated the company’s fundraising campaign to build a school, which was dedicated in 2009.

Since 1997, Kemin has budgeted money for charitable organizations and causes, especially those in which employees participate or have an interest. This gives employees strong incentive to “give back” — a value Mary has lived her entire life.

In her hometown of Des Moines, Mary has been a tireless community volunteer and advocate for children and families, cultural understanding and other community-building activities. She has been involved in organizations such as Anawim Housing, which provides low-income housing, and the National Conference of Christians and Jews. Mary was also a part of St. Ambrose/Jewish Federation Vietnamese Refugee Committee, a faith alliance that served an important role in the resettlement of more than 130,000 Southeast Asians in Iowa after the fall of Saigon. She is active in various church organizations within the Des Moines Catholic Diocese, including her home parish—Holy Family—and Dowling Catholic High School.

Mary’s contributions to the community have been recognized with prestigious awards. She received the Sisterhood Award from the National Conference of Christians and Jews in 1990, the President’s Angel Award from Dowling Catholic High School in 1996 and the People of Vision Award from Prevent Blindness of Iowa in 2002. Mary was named a YWCA Woman of Achievement and inducted into the Iowa Business Hall of Fame in 2006.

Honored as a “Woman of Influence” by the Des Moines Business Record newspaper in 2010 and a “Sage of 70” in 2015, Mary is proud of the opportunities the company has provided for women. Women occupy top leadership positions within Kemin, and at least half of the research and development staff are women.

“We feel that women have been a very important part of the growth of the company,” Mary told the Des Moines Business Record.

Mary graduated with honors from Iowa State College (now Iowa State University) in 1950 with a Bachelor of Science in home economics education. Before joining her husband in the fledgling family business—which was called Chemical Industries Inc. for its first seven years—she taught high school home economics for a year and was a social worker for three years, working closely with about 70 families in the Des Moines area who received Aid to Dependent Children assistance.